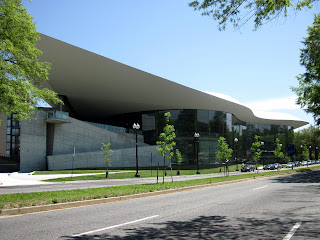 - The Washington Business Journal offers an opinion piece in this week's paper called 'A Shining Southwest Emerges' (subscribers only). The editorial highlights recent developments in Southwest, including Waterfront Station and Arena Stage, as well as the future development of The Wharf.

- The official groundbreaking of Camden South Capitol apartments occurred on June 1 according to the Capitol Riverfront BID. I had a client meeting at the same time as the groundbreaking so unfortunately I couldn't attend and take photos. The original groundbreaking date was May 17, but the threat of rain postponed the event until last Wednesday.    The 276-unit project will be located across the street from Nationals Park, at the northwest corner of South Capitol and O Street. Leasing should begin around the middle of 2013. Rendering courtesy of Camden Property Trust

- The Soccer Insider from The Washington Post reported on Friday that the developers of the Capital City Market near Gallaudet University in Northeast will not pursue a stadium for DC United.  According to the article, the removal of the NE site from contention leaves Akridge's 100 V Street site in Buzzard Point as the most viable site in play within the District for a new soccer stadium. Rendering courtesy of Akridge 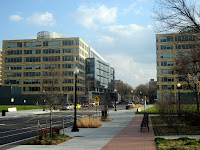 - Waterfront Associates sold its stake in the two completed office buildings at Waterfront Station to USAA Real Estate Company for $356 million on May 10 according to Forest City's SEC filing. The two buildings, located at 1100 & 1101 4th Street, are fully leased to the District government. The developers behind Waterfront Station still maintain three lots for future phases of development - the NW, SW, and SE parcels.  At least two of those parcels are slated as office and the NW parcel can be developed either as office or residential. The District owns the NE parcel and a residential building is planned for that site once the Deputy Mayor for Planning and Economic Development's office solicits developers to build on the site. According to DC records, the former EPA towers were sold to Urban-Atlantic in March for $20 million and will be re-purposed as 517 apartment units with construction slated to begin by the end of this year.
Posted by SWill at 8:42 PM

I hope the soccer stadium in Buzzard Point works out.