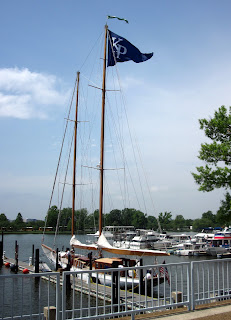 According to a press release from the Gangplank Marina, several tall ships will be docking in the Port of Washington (which includes the District of Columbia and Alexandria, VA) over the next couple of months, starting with the schooner Summerwind (pictured above), a 109-foot training vessel for the U.S. Merchant Marine Academy. The Summerwind arrived at the newly revamped E Dock on Saturday and will be docked there until Monday, May 9. While at the Gangplank, the vessel will support U.S. Department of Transportation initiatives, including career days for junior and senior high students interested in attending the Merchant Marine Academy. Other tall ships on the way include the Colombian Navy's Tall Ship the ARC Gloria on May 24, the Niña and the Pinta on May 26, and the Sultana on June 16.
Posted by SWill at 11:23 PM