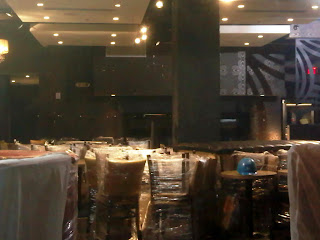 I receive comments and emails almost daily from readers asking about when Station 4 will open. If I had more news about the highly anticipated neighborhood restaurant I’d most certainly share it with you all. However, I don’t. I’ve tried contacting the manager for an update, but there’s been radio silence so far. What I do know is the following:
The restaurant’s website states that Station 4 will now open in May – previously, it was winter 2011. Since winter 2011 has come and gone, the date was changed to May. Word on the street earlier this month was the owner was aiming for a May 15th opening, however, this latest opening date estimate has passed as well. I’ve been told so many opening dates (ranging from August 2010 to last month) I will no longer believe anything until I see food being served inside the restaurant or on the patio for paying customers.
As I tweeted last week, a peek inside the restaurant shows most of the furniture is installed and it looks like it is almost ready to open. Above is a grainy photo I snapped with my camera phone from that evening. Reader Sylvia recently commented there was a “For Hire” ad taken out on Craigslist last month. That is a good sign that the restaurant will open soon. Here are a few indicators I will look for that will assure me that Station 4’s arrival in Southwest is imminent:
Before I discovered the restaurant’s website changed its opening date to May, I tweeted my guess of the actual opening date to be June 4. Let me know what your guess is for Station 4’s opening (the first day with paying customers) in the comments and whoever is first to correctly guess the exact opening date (Station 4 employees excluded!) will get a drink on me at the upcoming 3rd anniversary blog happy hour (more details about the happy hour coming soon).
And Z-Burger…all I know is they are supposed to open “in a few months” but once I hear something more definite, I WILL let you know, so stop asking, ok? :-)
Posted by SWill at 6:02 PM

Furniture is now outside on the patio!!! JUNE 3RD!!!