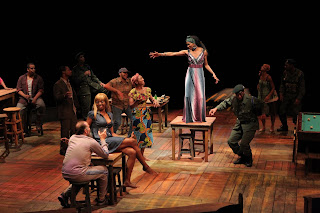 I saw Ruined on Saturday at Arena Stage during its opening weekend and was very impressed by the performance.  The music throughout was great and Rachael Holmes, who plays one of the main characters, Sophie, has a wonderful voice. Ruined takes place in the war-torn Democratic Republic of the Congo and centers around a bar in a small mining town that doubles as a whore house.  The main character is Mama Nadi, a strong, but arrogant woman played by Jenny Jules, who is the proprietor of the whore house and makes her living by catering to miners, soldiers, and whoever else is passing through town. Mama Nadi takes in women who can no longer go home to their villages for whatever reason, and gives them food and shelter in exchange for their services at the bar.

My favorite (not exactly favorite, per se, but it was the most moving) scene in Ruined was when the character Salima, played by Donnetta Lavinia Grays (person on right) tells Sohpie the story of how she ended up at Mama Nadi's. There were audible gasps in the audience as Salima tells her story, which is quite graphic. My one criticism of Ruined is I thought the love story between Mama Nadi and Christian, a traveling salesman played by Jeremiah W. Birkett, could have been better developed. There were hints of it in the beginning and at the end, but in the middle, it was more ambiguous.  Perhaps that was done purposely.
Ruined will be playing at Arena Stage until June 5 and tickets can be purchased using this link. Not recommended for children due to language and adult situations.
Photos courtesy of Arena Stage
Posted by SWill at 11:31 PM