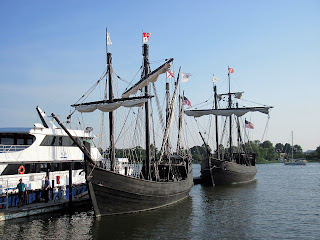 Two Columbus replica ships will be making their way up the Washington Channel to the Gangplank Marina this afternoon at 2pm and will stick around through the holiday weekend.  Below is the media advisory:

On Thursday May 26th at 2:00 p.m., the ‘Pinta’ and the ‘Niña’, replicas of Columbus’ ships will arrive in Washington. The ships will be docked at the Gangplank Marina, 600 Water St., until their departure early Monday morning May 30th.

The media are invited to a private viewing of the ships on Thursday after docking. The ships open to the general public on Friday May 27th. The Niña was built by hand and without the use of power tools and considered to be the most historically correct Columbus Replica ever built. The Pinta was recently built in Brazil and is a larger version of the archetypal caravel. Historians consider the caravel the Space Shuttle of the fifteenth century.

¿Dónde está la Santa María?
Posted by SWill at 8:25 AM