EPA Towers at Waterfront Station on Track for Conversion to Residential 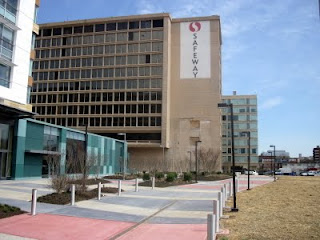 On the heels of the groundbreaking ceremony of Camden South Capitol apartments, which is supposed to get underway later this morning, there's news that the former EPA towers at Waterfront Station will soon be converted to apartment buildings. According to a source at Urban Atlantic, who purchased the buildings from Waterfront Associates on March 7 for $20 million, the developer will start construction this fall on the conversion of the East tower to 265 units and the West tower to 252 units. 20%, or about 104 units, will be set aside for households earning up to 50% of Area Median Income (AMI), which is approximately $51,750. Construction will last about 22 months, so expect delivery around the end of 2013. The buildings will be designed by Wiencek & Associates, the same architects that are working with Adjaye Associates on the Washington Highlands Library in Bellevue. The architects have made refinements to the designs originally done by Shalom Baranes Associates when the PUD for phase one of development was approved a few years ago. The ANC will most likely have to approve these latest design changes. I should be able to get new renderings in a few weeks since they are still being finalized. One thing is for certain though - the hulking concrete skin of the former EPA towers will be removed when the buildings are repurposed as residential.
Posted by SWill at 8:48 AM

Fantastic news and a big step forward for Southwest. As the ANC Commissioner for the District including the West Tower, I would welcome your feedback on the redesign to this blog, our Facebook page "6D01," or to bobc4dcsw@gmail.com.

I wonder what they'll do about the ventilation system in the building, and other materials? Given the "sick building" complaints of many EPA employees, I don't think I'd risk living there...http://www.law.com/jsp/nlj/PubArticleNLJ.jsp?id=900005459175&slreturn=1&hbxlogin=1

Did you see on Stn 4's site that they plan to open on This month? They have also advertised for jobs on Craig's List

Stacy -- Just like the Old DOT building (now Constitution Center), they're probably going to strip the building down to it's basic structural skeleton and completely redo all HVAC, insulation, and utility ducting and wiring. Going along with all other projects in the area, it will also probably be LEED certified.