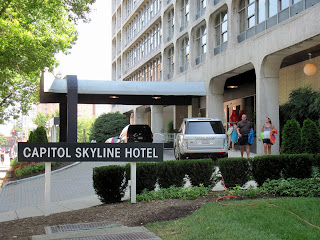 This news kind of slipped through the cracks, but the Going out Gurus blog at The Washington Post reported last week that after two years of running pool parties, the organizers of the pool scene at the Capitol Skyline Hotel will change from Brightest Young Things to the team behind 18th Street Lounge and Marvin. No more Spike'd Sundays and "zany" poolside activities - instead, the organizers will focus more on music, drinks, and lounging. Food trucks will feed the masses.
The pool parties became pretty popular since the Capitol Skyline Hotel refurbished the Olympic-sized pool, deck, and hotel a couple years ago. Two summers ago, the pool was the weekly hangout for the cast of Real World DC. Here's a snippet from the GOG blog about what's planned this summer at the pool: 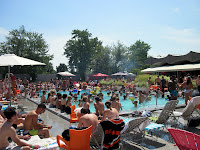 Starting Memorial Day, the parties -- called “Dubsplash” -- will take over the pool every Saturday and Sunday between 11 a.m. and 9 p.m. DJs will include many regulars from Marvin and Eighteenth Street Lounge, including Jahsonic, Adrian Loving and Thomas Blondet, with guest appearances by ESL Music artists, including Ursula 1000, and Scott says that there will be regular afternoon performances by local bands, such as the Arkives, a reggae band that packs Patty Boom Boom, and disco-soul singer Frank Mitchell Jr. Later in the summer, Dubsplash will host larger bands -- including Thievery Corporation -- in the hotel parking lot adjacent to the pool, but details about those events are still being worked out. The opening weekend will be DJ-focused. Saturday the 28th finds D.C. funk fixtures Thunderball joining Marvin’s DJ Keenan. Sunday’s pool party features Volta Bureau -- a new DJ team featuring Will Eastman, Micah Vellian and Outputmessage -- with electro-spinner Chris Nitti opening.

The entrance fee for the parties will be $15 and there will be two bar areas - one by the pool and another indoors that will serve "really nice cocktails."  Pool memberships are also available. The Capitol Skyline Hotel is located at 10 I Street.
Posted by SWill at 12:45 AM

It's a shame this establishment has such love for people who support hate speech.

I'd love to see my fave ESL acts there, but I promise I will never spend a dime at this place. I'd rather spend my money at the few other establishments we have.