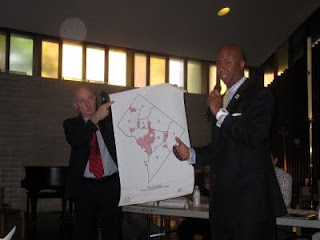 - Redistricting: At-large council members Phil Mendelson and Michael Brown attended the ANC 6D meeting – both of whom are members of the special committee in charge of redistricting. After a brief presentation by the council members, the floor was open to questions and comments from commissioners and the audience that lasted over a half hour. Just about all of the comments revolved around the proposal by Ward 8 council member Barry to annex Near SE and/or Near SW - everyone was against. The initial mark-up of the new Ward boundary map will be done after the council’s next meeting on May 25 and the entire process must be complete by mid-July. Once the redistricting map has been finalized, Ward taskforces will be created to work on ANC boundaries. After the council members left, commissioners Garber and Litsky introduced a resolution to keep Near SW/SE in Ward 6 which passed unanimously. 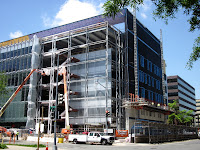 - Consolidated Forensic Laboratory (CFL): The new CFL under construction at 4th and E Street is 55% complete and on track for completion by June 2012. Components of the facility currently underway include waterproofing of the lab space and installation of the sun shade louver system along E Street, which is one of the green components of the building (the CFL is aiming for LEED-Gold certification). Next month, the protected sidewalk along the west side of 4th Street will be removed. It may be moved into the curb lane of 4th Street or removed completely – approval for shifting the structure to 4th Street is pending DDOT approval. The protected sidewalk is being moved so new sidewalks, trees, and plants can be installed from July – November. By Halloween, the exterior of the building should be complete. So far in 2011, 113 tradesmen have been hired, out of which 67 (or 59%) are District residents. Through the duration of the project, 257 tradesmen have been hired, of which 133 (or 52%) have been District residents, and only three have been Southwest residents. 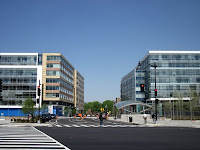 - 4th & M Street Intersection: Commissioner McBee mentioned that DDOT has issued a notice of intent for changes to the 4th & M Street intersection. Back in March, the ANC voted to request DDOT to make the following changes:

• Restore left-turn traffic signals on east & westbound M Street to turn on 4th Street.
• Allow drivers to make left turns on two lanes of northbound 4th Street towards M Street so employees at Fort McNair can get out of the neighborhood faster (the left lane would be left turn only and the next lane will allow cars to either turn left, go straight, or turn right).
• The Metrobus stop will return to the northeast corner of the intersection.
• U-turns will be illegal again on M Street.
• Restrict drivers from turning left from southbound 4th Street onto M Street (drivers leaving Safeway can use I Street as an alternative to go towards Near SE).

Within the past couple of weeks, DDOT has made changes to the 4th & I Street intersection (as I tweeted previously) which include the conversion from a “Barnes Dance” hybrid to a normal intersection. There is no longer a pedestrian-only window at the intersection; however, pedestrians are given a couple extra seconds to cross the street before the traffic light turns green for vehicles. This was probably done to facilitate the movement of vehicles from the Waterfront Station Safeway towards Near SE since the left turn lane from southbound 4th Street to M Street will be eliminated once that intersection is reworked by DDOT. 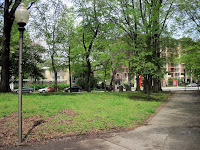 - Team to End AIDS: The ANC approved (6-1) the use of Town Center East Park temporarily by the Team to End AIDS endurance program to use as a staging area for their weekly runs around the city on Saturday mornings from May 21 – December 1 in preparation for the Marine Corps Marathon and other races. The use of Town Center East Park is temporary due to the proximity of housing and potential disruption of library patrons as 70-100 runners gather at the park each week. The ANC is looking into other locations where the running group may gather instead, including the northwest parcel of Waterfront Station and 7th Street Landing. 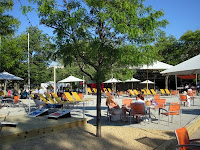 - 7th Street Landing Farmers Market: Bob Rubenkonig and Elinor Bacon from Hoffman-Madison Waterfront presented their security plan for the weekly Mobile Market, which will take place each Thursday from 5-8pm (June 2 – September 22). The park will be reconfigured for market days, with security barriers erected along the top border by the CaBi station and near the entry points to the waterfront promenade at the water-facing side of the park, resulting in three entrances. Near the top entrance, there will be six market vendors set up and behind them new benches will be installed. A stroller corral will be located in the top right corner of the park and the port-o-potties will remain on the opposite corner. Prepared fresh foods will be sold near the music stage (while jazz is being performed) and on the opposite side near the DC Harbor Cruises kiosk. Beer and wine will be sold on the left corner near the water-facing side of the park, next to one of the prepared fresh foods booth, and seating will be located in the center of 7th Street Landing. Bracelets will be required to purchase beer or wine and 100% ID check will be in effect. There will be 3 security officers and 10 staff members at the market, including those from the Arcadia Center for Sustainable Food & Agriculture and Hoffman-Madison Waterfront.
- Lucky Kabob liquor license: The ANC unanimously approved Lucky Kabob’s application for a CR-01 liquor license (may serve beer, wine, and spirits) at the restaurant, located at 1548 1st Street. Lucky Kabob opened last year and according to the proprietor, has done pretty well so far. After a six-month probation period, the ANC will reconsider the restaurateur’s request to allow dancing at the establishment at weddings, parties, etc. The Indian restaurant’s operating hours are as follows:

Any word on Station 4 and Z Burger? Station 4 looks like it is getting close, but Z Burger still looks a ways off. And are they still looking for a third restaurant?

Is the logic on the no left turn onto M street from southbound 4th to give residents south of M more time to cross the road?

Barath --- On the 6D01 facebook page the following was posted on May 4: "At last night's ANC administrative meeting, Ron McBee advised Station4's owner is aiming for a May 15 opening."

Bob has been doing a great job with updates, and I highly recommend that residents subscribe to the page.

Thank you so much for this excellent and prompt recap of the ANC meeting. I have found it especially frustrating since Commissioner Sobelson has let office that there are no longer recaps sent out to the community in an expeditious manner and in fact, no minutes have even been approved since he left.

Thank you to everyone who went to the ANC meeting and spoke out against Barry's proposal to annex SW. Also, like dihi, I would like to thank SWill for the recap and this blog in general.

Is the thought behind no left turns southbound on 4th street to allow more time for pedestrians to cross? Because otherwise it seems this is just going to cause more folks to get diverted down 4th rather than sending them northward to I.

@dihi: Regarding the ANC minutes, both January and February have been approved and posted on the ANC website since David Sobelson left. As the Secretary of ANC6D, I do appreciate your interest. The process for the minutes to be offically produced, approved, and posted is more involved than it might seem. March, April, and May are all in final revisions.

If you're really concerned and want to do more than sit back and complain (anonymously) we could really use help in someone to take meeting minutes for us. Today, I try to do that while also trying to actively participate in the meeting, and the result is sketchy minutes that take quite a bit of fleshing-out after the fact. Interested?

@Bob Craycraft...I did not complain anonymously. As most people in the neighborhood know, dihi.cobra@verizon.net belongs to Diane Schulz and I post frequently on many forums all over Washington and have a blog of my own.
The previous Secretary managed to participate and publish morning after recaps and timely minutes so I really don't see what your whining about. If you are incapable of doing so, I would be glad to render my services for a fee. My coop pays $200 a month to a professional secretary to take minutes and type them up.