Water Taxi Service May Start by Next Week 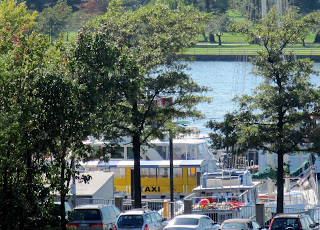 ‎8am Commuter runs may start as early as next Wed April 6. The regular commuter run schedules will be in place shortly. When looking to commute, tweet @Amer_RiverTaxi, Facebook us or txt us @ 240-547-9493. Estimated Pickup time is 5:15-5:30pm.

American River Taxi will be at the Southwest Waterfront Fireworks Festival tomorrow, where they expect to have tickets and membership cards.  Online ticketing will also be available soon.  According to their website, the water taxi service will have stops initially at Georgetown - Washington Harbor Landing, The Wharf - Main Landing at Gangplank Marina, and The Yards - Nationals Stadium Landing (Diamond Teague Terminal). Eventually, more stops will be added, including Old Town Alexandria, National Harbor, Poplar Point, and Reagan National Airport.  Travel time between stops are anticipated to be between 20-35 minutes since much of the waterway north of the 14th Street Bridge is in a no-wake zone and boat speed is restricted in that area.
By the way, this is not an April Fools Day joke :-)
Posted by SWill at 8:43 AM

Glad you made that distinction after last year's "Pizza Hut Bistro" trick.

Excited the AWT is finally going to be in service. Looking forward to taking it to Georgetown and not having to worry about parking!

Super excited about this especially since the weather is getting warmer! I'll be ready with camera in hand for what I hope will be a scenic trip.