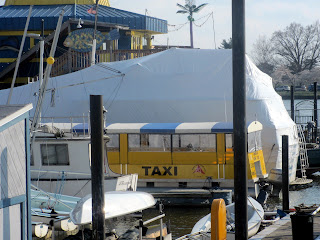 After receiving final approval from the U.S. Coast Guard at the end of March, American River Taxi (ART) has finally begun regular water taxi service, with the first regularly scheduled commuter run made by the "Dolley Madison" at 8am this morning.  According to Anne Tabligan, VP Marketing and Sales for ART, all of the boats in the fleet will be named for First Ladies that have been advocates for the Potomac and Anacostia Rivers.  So far, there is just the Dolley Madison, but more vessels will come in the next few years. Fares are currently being offered at a discount of $8 per ride (normally priced at $9) until membership cards become available.  Seniors and children under 12 receive discounted fares (members of the military will also receive discounts soon).  Discounted fares will also be available when purchasing multiple trips.  Tickets can be purchased on board or at a kiosk (either at Cantina Marina or Tony & Joe's in Georgetown). ﻿
﻿﻿ 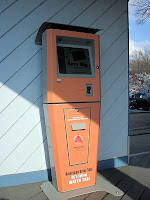 ﻿﻿There are currently three stops on the route (The Gangplank Marina at The Wharf, Washington Harbor along the Georgetown waterfront, and Diamond Teague Park across from Nationals Park). Plans are in the works to add stops in Alexandria and National Harbor.  Eventually, there will be other stops at Poplar Point and Reagan National Airport. Regular service will run from 10am - 6pm Monday - Friday (with an 8am commuter run) and Saturday from 11am - 9pm.  There's no service currently on Sunday, but this schedule is just for April - May as the water taxi service gets underway and may expand hours in the summer.  ART will shut down for about eight weeks in the winter (December - February) while captains get additional training and the vessels undergo regular maintenance. Washingtonians (and Southwesters in particular) now have another option to get around the city.
Posted by SWill at 11:31 PM

As one of two passengers who made it out for the first commuter run I wanted to extend my thanks to the ART for coming to the Southwest. It was a quick ride up the river with the sun coming up and the crew boats striding up and down the Anacostia. It was a great way to start the day and appreciate this majestic city. Also, the cost of the ticket was well worth not having to elbow through the platforms on the metro or navigate traffic.

The boat is quiet and smooth and the seats are comfortable. It is a bit chilly out still though the boat is enclosed and pretty warm. The crew was very polite and friendly. They informed us that they will be installing a bike rack on board in the near future which will be a great addition.

I have two suggestions for the ART: i) they should serve coffee on the morning run, particularly while it is still a little chilly out. Also, the boat leaves the G-Town waterfront for the run home at about 5 to 5:15. That’s too early. How am I supposed to get out of work, huff it to G-town, drown my happy hour beer or two at Sequoia/T&Js and then make it onto the taxi (perhaps with a roadie) to continue happy hour with margaritas at Cantina. I know many others who live in the Southwest and work over in the DuPont/Foggy Bottom area. It would be great if the water taxi became a Friday night ritual.

i think you mean "American River Taxi" in your lede (not Water).

Great news to hear they are starting up.

Do they have an idea of when they plan on expanding to the new stops? I'm particularly interested in National Harbor, as I have a wedding I'm going to down there in July and ART (if operating the route by then) will probably be the best way to go.

I wonder if they allow small dogs.

Hi there everyone! I'm with American River Taxi. These are great suggestions. We have actually moved our time for the commute home from Georgetown to also line up with the ball games for now (6:05pm). When our other vessel arrives, you will have an opportunity to take a direct water taxi home.

Coffee! What a great idea. We'll start implementing a coffee program shortly. When the weather warms up, we will be looking for other great ideas to serve the residents more. Just tweet Amer_RiverTaxi, txt 240-547-9493 or email info@americanrivertaxi.com to let us know.

As for new stops, we are working hard to get these in place. Our first priority is Old Town, Alexandria and other Virginia stops. We expect there to be access later this summer. In the meantime, would you be interested in a particular day that offered access there? We have 4 days per month to access their waterfront while they are working on their new waterfront plan.

And small dogs.. we love dogs. We are working on a way to have them on board. We will keep you posted on this option.

Many of you may also have heard that bike racks may soon be added. I guess our secret is out! We will have a press release when they become available.

Have a great day and we hope to see you on the water soon!

@Bryant: The Map shows Metro Stations in which our free shuttle connector will be connecting to. IE: Although Waterfront/SEU is closer to the Southwest waterfront area, the L'Enfant Plaza Metro offers more Metro Line connections.

Saturdays are definitely doable to Old Town. We'll work on something for the summer months ahead!

Thanks for the interest!

I'd probably use the water taxi on Fridays once a month to commute to work in Old Town Alexandria from SW.

I would totally use the boat to/from Georgetown and Old Town on the weekends. Thanks for the great update too, ART!

Saturday and Sunday service to Old Town and Georgetown would definitely be of interest to me! If I could bring my dog on board that would be even MORE incentive! (though I hope you don't restrict to only the little toy breeds since i saw you said "small" dogs)

Thanks for sharing such a beautiful article. I liked it very much. I am sure you will keep on doing good job.