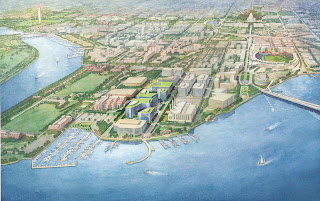 A Planning Assistance Team (PAT) from the American Planning Association studied Buzzard Point in November 2009 at the request of Ward 6 Council member Tommy Wells and the Capitol Riverfront BID, whose boundaries include the isolated waterfront neighborhood.  The final report was finally released and includes a vision for how the area should be developed over the next 20-25 years.  Since Fort McNair isn't going anywhere, the report focuses on the mixed-use part of the neighborhood south of the existing residential neighborhood and east of the military installation. The report admits there are constraints on this part of the neighborhood, including the PEPCO plant and the Coast Guard Headquarters building and another office building, both of which block access to the waterfront.  The PAT recommends the neighborhood should be "a center for low-intensity recreational uses by area residents, visitors to the area and residents of other parts of the District, as well as an important link along the Anacostia River chain."  Major points include the following:
Buzzard Point has been making news lately, including plans for a condo building adjacent to the Buzzard Point Marina and rumors that DC United is looking at the 100 V Street parcel as a potential stadium site.

Rendering of Buzzard Point neighborhood courtesy of Akridge.
Posted by SWill at 5:35 PM

So what exactly is Buzzard Point's "distinctive character"?

What would be great is if DDOT had actually decided to move to the future and build an iconic Douglass bridge rather than the antiquated design they've "chosen". The bridge in this rendering here was my favorite (along with most people I know) and it's a shame that along with the new development we don't get a new iconic bridge. Boston pulled it off...why can't we?

I think the "distinctive character" may be the Crucible --- that scary s&m nightclub at Buzzard Point.