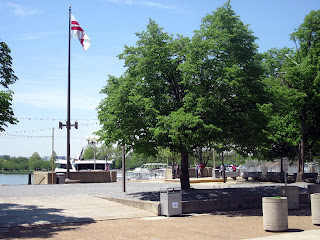 7th Street Landing will be activated again each week this summer with activities from Thursday to Sunday. In this month's The Southwester, there are some details about what the Hoffman-Madison Waterfront team has planned for the waterfront park. As mentioned previously, there will be a mobile farmers market on Thursday evenings from 4:30pm-7:30 pm starting on June 2. The Mobile Market is a retrofitted school bus that runs on bio diesel from the Arcadia Center for Sustainable Food & Agriculture. The mobile market will feature organic produce, beer and wine sales from Churchkey, baked goods from Buzz Bakery, and meats from Red Apron Butchery. 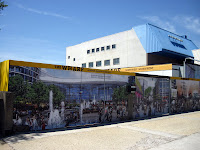 In addition to the mobile market, there will be jazz performances on Thursday evenings hosted by Westminster Presbyterian Church. Friday evenings will bring music performances from local artists to the park from 5:30pm - 7:30pm as well as BBQ from King Rib (that was previously on the property of St. Augustine's Church) and other food trucks. Saturday morning yoga will return to 7th Street Landing at 10am, as well as breakfast items from King Rib. BBQ will also be served for lunch on Saturday & Sunday from 12pm-5pm. The weekly events at the park will last this year until September 25. Interim programming at 7th Street Landing will take place over the next couple of years as the Hoffman-Madison Waterfront team goes through the PUD process and gets ready for development of The Wharf by the end of 2012.
Posted by SWill at 11:22 PM