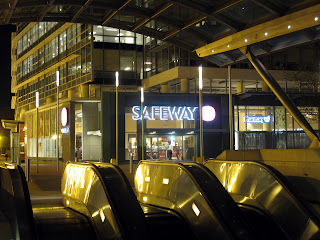 After Daylight Savings Time was implemented a few weeks ago, the Waterfront Station Safeway resumed its normal hours of operation, from 6am - 11pm, 7 days a week.  Back in November, the store closed at 10pm and at the time, it was explained by Craig Muckle, Safeway's Manager of Public Affairs and Government Relations, that the change would be temporary: 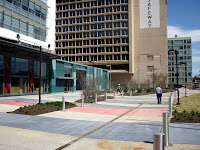 We’re simply going to a winter schedule to give us some extra time to re-stock the store during the overnight period. The hours will be extended again during the spring.

Some other things I've noticed during recent visits - the side door next to Starbucks has been fixed and is usable again.  Signs are up near that entrance alerting customers to have their receipts ready for checking by the store greeters. Fountains at the metro plaza have been turned back on. Also, the fence around the new patio area of the store has been removed and people are free to walk on the roadway leading to a new garage entrance. (See above photo). However, fences are still up on the SE parcel fronting M Street that will eventually become an office building.
Posted by SWill at 8:15 AM

Any chance of explaining why there are multiple types of lighting along the walk in front of Safeway etc. to the other side in front of Station 4/ZBurger? These are all new, so I can't understand why the lighting isn't uniform. Also, how long will it be before the plastic bag and duct tape are removed and diffuser replaced on the stem lights in front of the Metro stop to M Street?

Have the answers to both after calling the management company. The different lights are uplights for outdoor seating and downspots for the walkway. Also, they are aware of the broken stem light and it is ordered. Very helpful and very friendly. She closed by saying wait until we get a ZBurger milkshake!

Craig: Thanks for the updates...I was wondering about the different light-types myself.