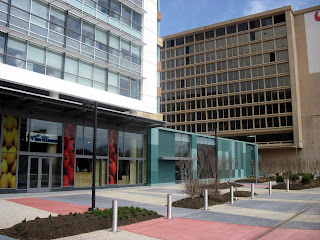 I took the above photo of the patio area in front of the Waterfront Station Safeway yesterday, which looks to be just about complete, except for tables and chairs that may be installed.  Landscaping is in place and doors have been added from the elevator bank inside Safeway to the patio area. The EPA tower lurks in the background, which is supposed to be re-skinned and repurposed as a residential building, along with its sister building on the other side of Waterfront Station.  I've been hearing chatter recently about this building getting underway relatively soon since the multifamily market is heating up in DC. 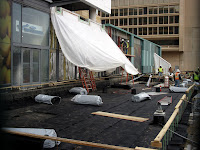 Here is a photo of construction back in early February. The patio area has been under construction for a few months since work on the parking garage below it was completed earlier this year. The old Safeway next door was demolished last summer, just a few months after the new store opened. Last spring while I was on a sneak peek tour of the new Safeway, Craig Muckle told me the patio area would open about a year from then, so it looks like he was on target with that date. 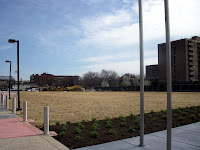 The SE parcel fronting M Street will one day become an office building, but for now, it will be a grassy area, similar to the ones on the NE & NW parcels closer to I Street. The SW parcel will remain a blacktop surface for now since Bank of America will be staying in their trailer until their lease ends in December 2012.  While the NE & NW parcels have not been used for regular interim uses thus far, that may change soon (at least on the District-owned NE parcel). 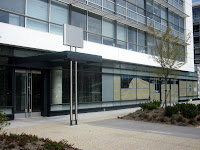 Station 4 and Z-Burger build-outs continue on the west side of 4th Street.  I was told a couple weeks ago by Med Lahlou that Station 4 is now aiming for a mid-April opening and the last I heard about Z-Burger was it's planning on opening in May. Brown paper has covered up most of the windows at Station 4, which seems to be further along than Z-Burger.
Posted by SWill at 9:28 AM

Thanks for the udpate! Hopefully Station 4 and Z Burger are on schedule. I can't believe that the Bank of America trailer will be lurking around until December 2012! That is truly awful. Is there really no way for the city/developer to entice them to relocate?

For the SE lot (the one in front of the Safeway patio), at one point they were digging a rather substantial hole, now it looks like an empty field. Is there a foundation for a building buried under that field?

Appreciate the update, I'm curious to know if and when the developers will be removing the chain link fence along M Street, SW (area for future building)?

As of this day, the lot is covered with straw, I'm thinking grass is being grown. I hope percautions will be taken to prevent the area in question from becoming a brown (muddy waste land after a rain)field. One can see the condition of the lot directly north of the CVS. It looks terrible, half grass covered, half brown worn dirt.

As we know from geometry class...the shortest distance between two points is a straight line, people will wear a path coming from the east to get to the Safeway. Hope there is something in the works to prevent people from taking a short cut and wearing out the grass.

Steven: The big hole was dug on the SE parcel to build a foundation and parking garage. If you go down to the Safeway parking garage, you'll see there is a new section (not open) to the right of the store entrance.

west156th: I don't know when the chain link fence will be removed - perhaps after the grass has had a chance to grow on the lot? If the NE parcel is any evidence, once the fence comes down, there will be a worn path between M Street and Safeway.

If Station 4 is truly planning a mid-April opening, they should be doing a little more promotion. The lack of an announced date leads me to believe the restaurant could end up opening a little later than that.

according to station4dc.com they are looking at a December 2011 opening???

Why the delay? I was really hoping for something by summer.

asdf: The restaurant's website doesn't say a December 2011 opening, it says Winter 2011 (which means sometime between January and March, not December). Their timeline for opening has slipped from Winter 2011 to Spring 2011.

I've been told Z Burger is looking to open in May.

Any further updates on the Zburger and Station 4 openings?