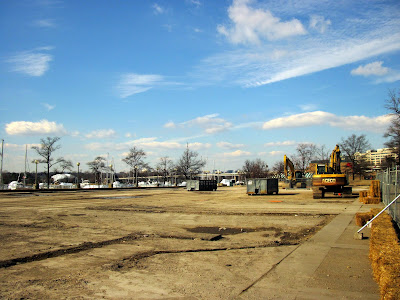 There's an article in The Washington Post announcing that the Washington Kastles World Team Tennis organization has made the decision to move to the Southwest Waterfront, and it sounds like the move will be permanent. Back in December, the developers of the Southwest Waterfront mentioned at the ANC 6D meeting that they were in negotiations with the Kastles to move their stadium to the site of the former Hogates building, which was torn down in January by the city. From the article:

Construction is expected to start in coming weeks on a temporary facility, which is expected to cost about $10 million to build and operate for two years, [Kastles owner Mark] Ein said. Like the Kastles' former stadium, the new venue will have grandstands on all four sides, with openings at each corner. The openings will offer views of the waterfront and skyline. The seating capacity will remain roughly the same, 2,700 to 3,000, with a range of ticket prices. The stadium will be available to host other events after the Kastles' season, which runs July 4-24 this year. As existing structures are demolished along the waterfront in coming years, the Kastles could move to a stadium erected a bit farther east, or they might play indoors at a 4,000-seat music hall that Hoffman plans to build...Fans in premium seats will be able to have food and drinks delivered at courtside, and the venue will be ringed with
concession stands. In keeping with the WTT's fan-friendly ethos, the area around the stadium will have family-oriented activities, such as "QuickStart" tennis, in which children play on smaller courts and hit oversized balls; face-painting; a moon bounce; and an autograph zone where fans can collect players' signatures after matches.

Some of the other events planned for the stadium that's mentioned in the article include food cook-offs, arts festivals, beach volleyball games, and concerts.
Get ready for some celebrity sightings along the waterfront this summer, including the Williams sisters, John McEnroe, and Anna Kournikova.
Update: There will be a press conference announcing the move at the former Hogates site on Monday morning at 11am.
Posted by SWill at 8:51 PM

Not a "huge" tennis fan, but I've been to a few WTT matches here in town on free tickets and they were fun. On a beautiful day, it's not a bad deal. Hell, I might actually pay to see a match this year because they're in the 'hood. Win-win for everyone.

I am really excited that the Washington Kastles are coming to the Southwest Waterfront. I am a huge tennis fan and I am looking forward to walking a block from my condo to go to the matches! This addition will bring a lot of new people to Southwest and it is a much better location than a parking lot in Chinatown.

This is a great thing. Now if the Soccer stadium can move to southwest that will be three sports within the vicinity...

the only problem is that the Metro is already SUPER crowded.

10 mil for a 2 year temporary site? That is WASTEFUL. Why not just wait and build the real building? I don't understand

Hey, it's their money. They want to invest 10 million for two years in our neighborhood, so much the better. Good for them; good for us!

their website says to get off metro at l'enfant. definitely not a shorter walk than actual waterfront metro. odd. are they upset safeway wasn't a sponsor?

I've got some mixed feelings about this. While I'm happy that this is new, highly visible development in our area, I'm nervous about what will happen the other 11 months out of the year. The last thing we want or need is more urban blight.

The challenge will not be to build this stadium, but to find functional uses for it for the vast majority of the year. As we already see with the baseball stadium, activity dies down considerably without the events. These sporting facilities need to be complementary entertainment to existing social value, not an appeal in and of themselves. In this way, Arena Stage succeeds. I can only hope the Kastles stadium does too. But I dare say that the Waterfront Redevelopment will succeed in spite of this stadium, and not because of it.

Correction -- my reasoning about Arena Stage is that it IS an appeal in and of itself for the majority of the year, which is why it succeeds as *positive* development. My hope is that the stadium is able to host other events that will bring warm bodies to the area. However, if it's not going to do that, it will be hard to view it as positive on its own.

Perhaps the temporary Tennis stadium could turn into a temporary skating rink in the colder months?

Any word about whether the Kastles will invest in fixing up the courts at Jefferson? I would LOVE to have decent courts in the neighborhood to play on.

Doesn't it seem a bit out of touch with the neighborhood to call it "Kastles Stadium at the Wharf"? Does anyone refer to the Waterfront as the "Wharf"?

Did you even bother to read the article? Are you even familiar with the Kastles current setup? It's a TEMPORARY FACILITY, which means it is broken down when the season is over. It doesn't just sit there.

Christ, I'm surprised some of you mouth breathers are even intelligent enough to turn on your computers. And you try to blame all the 'hoods ills on the people in the projects. For shame.

Wow! Such animosity! Perhaps you missed the part of the post that suggests (and I quote) "it looks the move will be permanent." The actual WaPo article only mentions that it is a temporary stadium - NOT that it will be broken down during the offseason. In fact, in direct contradiction to your point, the article explicitly says that "the stadium will be available to host other events after the Kastles' season." Not to mention that both the article and SWill's post entertain ideas for the future permanent venue. Did YOU read anything aside from the comments?

Guidelines for posting something online:
1. Is it insightful?
2. Does it entertain?
3. Does it make the world a better place?

If your comment doesn't do one of those things, then be sure to throw in some arrogance and random insults to distract people from your complete and utter irrelevance!

Underground parking seems like it would be a huge challenge given the proximity to the water. Forget $10m for the stadium...the garage is going to be pricey.

Anonymous @ 12:10: The website mentions both L'Enfant Plaza and Waterfront-SEU Metro stations, depending on whether a traveler is coming on the green line or from a different direction.

Anonymous @ 5:42: The Wharf is what the developers are calling the Southwest Waterfront development. I've heard several people describe the fish market as "The Wharf" previously.

sb: The underground parking already exists on the site from when Hogates was there.