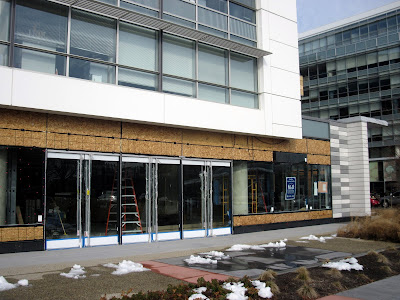 New ANC 6D commissioner Bob Craycraft is providing his single-member district constituents (6D01) a monthly electronic newsletter highlighting activity in that part of the ANC. One of the items in the newsletter includes some intel about what is planned at Station 4, the new bistro coming to Waterfront Station on 4th Street. Above is an older photo of the build-out from late January. Craycraft describes the interior plan as follows:

Rather than the traditional wood-paneled pub/sports bar design, Station 4 looks to be very contemporary and uses plenty of wood, metal, glass, and even stone to echo the modernist architecture of Southwest.

Also, the menu appears to be more upscale than other restaurants owned by the operators (like Tunnicliffs and Stoney's). Station 4 is looking for an early April opening and Z-Burger is supposed to open by May, or sooner. A fourth food establishment is supposedly close to a lease agreement with the landlord and ANC Chair Ron McBee mentioned to me at the CBCC summit on Saturday that an AT&T Wireless store is supposed to open. My guess is the AT&T Wireless store will open in the vacant retail space in the 1100 4th Street building (the one with the green door). I'll post about other items from Craycraft's e-newsletter throughout the week.
Posted by SWill at 8:30 AM

Also glad to hear that Station 4 is upscale. I definitely will be eating there.

"Rather than the traditional wood-paneled pub/sports bar design, Station 4 looks to be very contemporary and uses plenty of wood, metal, glass, and even stone to echo the modernist architecture of Southwest."

Of course we have to reserve any final judgment until we see the place, but I'm initially disappointed by this.

There's a reason so many pub/sports bars use wood paneling - it gives a warm, inviting feeling to a place. I'm not sure how inviting metal and glass is going to feel.

If I want metal and glass I can go eat at the Reagan airport concourse, or Pentagon City food court. That's not what I was hoping for in our neighborhood.

What SW needs is a restaurant with a touch of class, not something that looks like a sports bar. Station 4 seems to be a HUGE step in the right direction.

I hope a "Sunday Bruch" will be served, tried of driving to VA/MD when all I'll have to do is walk across the street.

As for the Z Burger, I hope they don't put the Subway out of business, Z Burger has a tempting inexpensive menu..

Any hints as to what the 4th food establishment will be? I hope it's not another restaurant from a massive chain like Subway ... How about a Pete's Apizza or Taylor Gourmet?? Dare to dream ...

AK: I have no idea what's the potential fourth food establishment. I wish I did!

Any idea how do we sign up for the newsletter?

Pete's apizza would be amazing ... Now my hopes are up. Swill, you mentioned the menu -- are there details about that in the newsletter, or is there another way to see details about the food? thanks.

another small business would be great-deli/pizzeria would be awesome.

a chinese or pizza place would be great.

In response to the question about how to sign up for the newsletter (Bob Craycraft's newsletter for ANC6D01), I think you can just email him and ask to be added to the list. bobc4dcsw@gmail.com I found out about it and got added to the list after I emailed Bob about a SWDC issue that concerned me. I have to say I've found Bob to be very helpful (as helpful as he could in dealing w/ unresponsive DC agencies), and the newsletter is a nice touch! (Note: don't try to email him through the ANC website, as I initially did. Apparently that doesn't work, unless it's been updated recently. I found his other email address that he uses for ANC communications through a google search.)

Oh, another restaurant would be great news! I don't have real opposition to Subway, but it's not real useful to me since, while I might sometimes get lunch there, I'd never get dinner from that kind of place.

i don't think a mexican place will survive.

I agree on having no remorse for a sports bar/pub like Tunnicliff's. For those who have to watch football reruns and wear sweats and a ballcap to enjoy a meal, there are plenty of options nearby.
Yes, their announcement did include Sunday brunch.

Hey, I like Tunnicliff's! They have an outdoor area, a bar area with sports televisions, and a dining area in the back with no televisions.

I always sit in the back where it's cozy; wood paneling and all.

Eating at a table and watching people through large glass windows walk up & down 4th St. is not my idea of "cozy" - I can do that right now in the Safeway.

By "white tablecloth" do they mean pricey? It's one thing if they want to go with more modern decor, but I think a place that focuses on decent food/drinks and decent prices would do better than a fancier place. I'd love a restaurant that I just wander down to after work for a drink and some food instead of having to trek out to another neighborhood.

If a Baja Fresh/Chipotle/anything similar opens up nearby, I'm going to gain 50 pounds.

For those not sure what they mean by white table cloth,...If you've ever been to P street, NW between 14th and 15th. The developers other restaurant Stoney's is a sports pub, the competitor (and probably much more profitable) neighbor to them is Logan Tavern, a white table cloth restaurant that is ALWAYS packed, especially for brunch. I think the owner of Sta. 4 is doing a great thing taking the high road.

Pete's Pizza would be awesome. I wouldn't have to endure lazy complacent Safeway employees for a slice that taste like cardboard anymore.

4th restaurant should either be a PIZZA OR CHINESE place!!!. lets make it happy.

Are there any updates on when Station 4 and Z Burger will open or what the new restaurant will be? I'd love to have a Baja Fresh in the neighborhood...