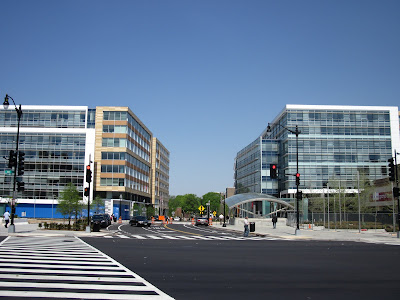 Restricting drivers from turning left onto eastbound M Street from 4th Street will allow pedestrians more time to cross the intersection on all sides since traffic signals in the District operate on a 100-second cycle. DDOT will have MPD enforce the new traffic rules. The commissioners voted 5-1-1 to approve these changes, which will take place once DDOT gives 30 days notice to residents.

Drivers don't obey any of the traffic rules currently placed at that intersection, so I seriously doubt that drivers will actually obey the left turn onto M street restriction. In my opinion, simpler is better. Wouldn't a more effective solution be (a) have dedicated left turn lights in all directions (e.g., both from M onto 4th and 4th onto M); (b) put in traffic cameras to prevent people making turns on red; (c) prevent cars from parking in the right turn lane on the south side of M street; and (d) logically consolidating the traffic lights (so, for instance, drivers don't have to look at two different lights on both sides of 4th street when facing north at M to figure out what they are allowed to do)? This would make it safer for pedestrians because drivers would be better able to see what they are doing and understand what they are allowed to do.

so the're putting it back to how it was?

Removing parking spaces is more than a bit annoying - after all the fuss about how stadium would make parking harder (and it did), reducing it even further is annoying. Traffic cameras I'd totally get behind, though. And I'm really glad the turn arrows are returning to M street. I used to leave Safeway and go around the block to head down 4th Street...once they disappeared, I started making the left right onto 4th from the parking garage at Safeway.

Barath: your proposals make a lot of sense and would likely work, which is precisely why DDOT won't implement them.

Initiate the countdown until we see an upside down car in the intersection.....

My understanding is that the ANC voted a couple months ago to remove some of the parking spots (four?) on the south side of M street, but this has yet to be implemented.

Personally, I think it's a shame they will be reverting back to the old system. I don't think the problems are an inherent weakness to the pattern DDOT set up, but rather DDOT's incompetence in making a smooth transition -- namely just springing it on drivers -- "Surprise!! Here it is!!!"

They could have also made left turn arrows on M less necessary by synchronizing the 3rd and 6th street intersections. If both of those turned red slightly early, then the last 5 seconds of cross traffic could clear out the left-turners.

Also, re: left turns off of M street. A lot of incompetent drivers don't realize that when you're turning left, you must inch out part of the way INTO the intersection as you wait for cross traffic to clear. You don't just sit there at the stoplight. This helps traffic move so that in the event that cross-traffic is too heavy, two left-turning cars can turn on yellow. This kills me EVERY TIME.

The no u-turns on M street is a complete pain in the ass for residents of Waterfront Tower since you will only be able to get into the parking lot if you turn from 3rd Street onto M. Perhaps they should consider removing the island or at least carving out part so people can turn left from M Street into Waterfront Tower.