Graduate School to Anchor The Wharf 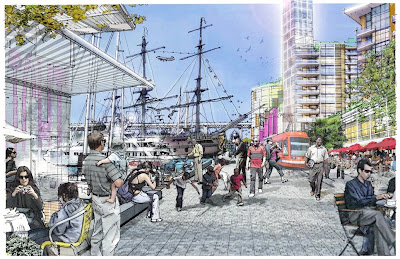 It's been a big week for The Wharf, the redevelopment of the Southwest Waterfront by Hoffman-Madison Waterfront. Besides launching a slightly redesigned website with a new color scheme similar to the Baltimore Orioles, there was a press conference on Monday announcing the Washington Kastles would relocate to the development in a new stadium at the former Hogates site. Now, ahead of Mayor Gray's planned press conference tomorrow at the Southwest Waterfront, the Washington Business Journal broke the news that the Mayor will announce that the Graduate School will be moving to The Wharf. From the article:

D.C. Mayor Vincent Gray is expected to announce Thursday that the Graduate School, currently headquartered at 600 Maryland Ave. SW, will build upward of 200,000 square feet at the Wharf, what Hoffman-Madison Waterfront is now calling its waterfront project. A press conference is scheduled for noon at 700 Water St. SW. "The Graduate School will be a significant anchor for The Wharf development on the Southwest DC waterfront," Linda Wharton Boyd, Gray's spokeswoman, said in an e-mail. "In keeping with the Gray administration agenda for education reform, fiscal stability and job creation, this development hits all three priorities. We are excited that they decided to expand their mission right here in this landmark waterfront development." 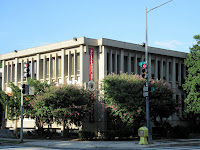 The Graduate School currently owns Southeastern University's campus building at 6th & I Street (pictured here), which shuttered in 2009 after losing its accreditation with the Middle States Association of Colleges and Schools. At one point, it was thought that the Graduate School would renovate or tear down the SEU building to relocate its school there, but now is in the process of trying to sell the campus building. One of the organizations looking to bid on the building is AppleTree Early Learning Public Charter School, which came before ANC 6D in December to express their interest in expanding their presence in Southwest. At that meeting, the ANC voted 5-0-1 to support AppleTree's bid.
Phase one of development at The Wharf (from 7th to 9th Street) will get underway next year and should be ready by 2015.
Update: The Washington Post also has a story on the Graduate School, including a rendering of the building, which will be located at the corner of Maine Avenue & 9th Street. The Post also describes how the school will function. From the article:

[Graduate School President and Chief Executive Jerry] Ice said Graduate School USA will begin tailoring new programs to meet the needs of city government. "We have not been that kind of provider . . . and we think we are in a good position in a number of key issue areas to provide that locally," he said. The school also plans to open the doors of its new educational center to other colleges, universities and nonprofit groups offering programs that would help D.C. residents acquire skills needed to compete for local jobs.

Update #2: Here is a link to the press release from the Graduate School USA.
Posted by SWill at 9:26 PM

Hmmm, doesn't really do much for better or worse for the residents that live in the neighborhood. Next.

Having pre-leases helps them get financing, which gets the project built faster, which brings more retail and amenities to our neighborhood.

Hundred of employees and thousands of students will bring restaurants and retail that residents can enjoy (check out the lobby area of the USDA building on Maryland Ave SW). And, for some waterfront residents it will be an easier and safer evening education option than the current building. We need to get over the thinking that unless developers investing millions of dollars into our community offer "free this" and "free that" for SW residents that their project shouldn't be allowed in. That's the attitude that produced the Waterfront Mall and Zanzibar because nothing decent could survive.

Graduate School as an anchor? It's pretty low-brow.

haha! Well you can just go enjoy your Confit Of Moulard Duck Foie Gras at the Mandarin while the rest of us sw'ers throw our chicken bones on the sidewalk.

Kind of curious about how people will get there though.

I'm not sure anybody complained about there not being free this or free that. I'm just looking for development that residents can enjoy and the Graduate School isn't something that I care about. If it draws other businesses then fine. But, overall, I'm pretty whatever about the Graduate School.

If I had to pick between the Graduate School and just another hotel, I'd pick the GS - no question. While a hotel can bring a lot of tax revenue for the District, the GS is much better for our quadrant.

A graduate school brings a regular clientele, as opposed to transient visitors - people who have meals before or after class. People who will engage in fun social activities with their peers or have pre-classtime study sessions. Heck - you'll get all the guys asking the cute girl in the front row for a drink after class. It's a great opportunity to attract people who will end up KNOWING the neighborhood and hopefully creating a distinct atmosphere for 'the Wharf.'

I think the major challenge will be to prevent this from becoming too much of a "car-culture" venue. Given its location, there's the potential for that already - with 395 close by. The closer they can make this activity to 7th street, the better. If they plop the school closer to 9th street, it approaches a Metro no-mans-land.

@Postit
I don't think you understand the Graduate School.
It is for working adults, mostly goverment workers.

The 7th Street Circulator will loop in front of the building, that would be reasonably good connectings from L'Enfant Plaza but certainly nothing like the convenience of the current building sitting atop four Metro lines. This won't take away from the three planned hotels, this is part of the planned office portion of the waterfront redevelopment.

@Anonymous 2:22-
What's your point? Nevermind that I know people who have taught at the GS Graduate School, let alone taken classes there. Do working adults going to school not eat meals, ask out girls, or study before tests?

They're not undergrads, I grant you. But in case you haven't noticed most of the popular social scenes in the District are frequented by (you guessed it) working adults - mostly government workers, to boot!

@Anonymous 4:32
Yes, the Circulator goes by...though sadly not after 9pm for the time being. Thanks for clarifying that it is occupying the office space and not supplanting the hotels. SWill - can you confirm this because your twitter posts before seemed to imply the opposite? If that's upheld, it's even better -- night classes/traffic will replace what would otherwise be deserted space after 5 or 6pm. SW has enough of that kind of office space already.

Sounds like a good start. As SWill pointed out, pre-leasing helps the development secure financing, and the sooner they can secure financing, the sooner construction can get underway and we can all start reaping the benefits of redevelopment, more retail and amenities in the neighborhood, and rising property values. In addition, while the Graduate School may not be sexy, educational opportunities are good for the community because of the training it provides for locals and non-locals alike, and as someone else pointed out, the classes are scheduled at a variety of times throughout the day, which provides customers for nearby retail and restaurants before and after classes as well as foot traffic throughout the day and evening, which contributes to safety so that we don't have deserted sidewalks when traditional offices close at 5:00 or 6:00 pm. Hopefully this is just the beginning of a diverse array of businesses at SW waterfront (or The Wharf, as it's now called).

PostIt: My tweets about guessing which anchor tenant would be unveiled today was just a random guess. It turned out that the tenant announcement was for an office tenant, not a hotel operator. The Graduate School doesn't take the place of one of the three hotels planned at The Wharf, but counts towards the amount of office space planned. Also, a streetcar line is proposed to run along Maine Avenue and the new Wharf Street, but who knows if that infrastructure will be in place by 2015.

GS is awesome - they have super-cheap language classes and tons of professional development programs.

It's not really a grad school in the sense that SEU or any other university is. So it doesn't attract full time students but rather professionals from all career paths taking a random assortment of courses.

I think this has terrific community benefit for both the SW community and the project. The plans call for what looks like a terrific educational and job preparation opportunity for a broad spectrum of our SW residents. This is much more than the old Graduate School has been. And, as far as an anchor for the SW Waterfront, I would, instead, call it a perfect fit. Instead of dead-at-night office space, we have 18-hr. a day life on the Waterfront.

I wouldn't get too excited at GS alone generating much activity after 5 PM in that area. The neighborhood around their current location pretty much shuts down after 5:00.

Their language courses are only $375 for a semester! I'm definitely going to take advantage of that.

Also, most of the classes are geared towards professional development. They have a nice offering of PMP PDU credit classes.

To Steven on March 11, I think it's worth noting that the restaurant/cafe in the current Graduate School building stays open for dinner (and secured a liquor license to run a bar) while virtually every other comparable limited-service food service option in our area shuts down tight at 3pm. The only difference is those hundreds of students coming for evening classes. Plus, remember that the GS will be a component for a mixed-use. I took facility, not the end result of it. It has to be better than an office building that is empty every weekday from 5:30pm and all day weekends. I took Spanish lessons there several years ago, and about half the time came early and had a light dinner, met some other students, etc. Marry that with a fun waterfront location and the result will be excellent.

@Anonymous 3/14
I agree it's better than a regular office in terms of nightlife, and agree it helps somewhat but that sit down VdF is the only thing left open after 5:00 (I guess that and 21st Amendment in the hotel). It's a good start, but I was just cautioning against those who might think that it's the only thing we need for 18 hour activity.