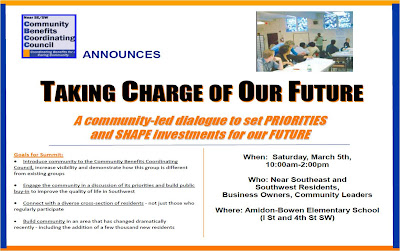 This morning, I attended the Near SE-SW Community Summit: Taking Charge of our Future, which was hosted by the Community Benefits Coordinating Council (CBCC) and facilitated by America Speaks. The summit was well attended and contained a diverse audience of community members, local pols, and some developers (I spotted Elinor Bacon from the PN Hoffman-Madison Marquette Waterfront team). A few ANC 6D commissioners were present, including Andy Litsky, Ron McBee, and Roger Moffatt, as well as former commissioners Jane Jorgensen, David Sobelsohn, and Mary Williams. There may have been others, but those were the ones I noticed. Ward 6 Council member Tommy Wells also came in the afternoon. My guesstimate based on the number of tables and the fact that the room was pretty full is there were between 100 and 125 attendees.

The five main issues for discussion at the summit were as follows:

Each person got to choose which issue they wanted to focus on for the day and then the room was divided into groups of people who wanted to discuss the same issue. I sat at one of the tables discussing Neighborhood Oriented Retail and Services. Most people chose Youth Education and Services, while the other four issues were pretty evenly distributed. Each group discussed assets and challenges that their issue presented to the community, then brainstormed ideas that could be implemented over the next 1-3 years to help resolve their particular issue. Out of the large lists of ideas for each issue, everyone in the room voted on which top two ideas were most important.

Once the top two ideas for each issue were voted on, the groups met again to discuss how to implement those ideas. The CBCC will make the results of the brainstorming session available in about a week or so and will use these ideas to come up with suggestions for community benefits agreements between developers and the ANC.

Did any of you attend the summit? What did you think?

You mention that Elinor Bacon, one of the team developing the SW Waterfront, attended the meeting. She can give anyone information on Community Benefits already built into the SW Waterfront project over the past several years of DC Council Action, competitive bidding commitments, review by the National Capital Planning Commission, etc.
Southwest's ANC and SWNA and many, many residents attended dozens of hearings to give input.
Ms Bacon's email address is
ebacon@erbacondevelopment.com

I attended the Summit. My category was housing. I was very impressed with the Summit. Thought the neighborhood was well-represented. I also thought it was interested in the diversity of perspectives of what would or does make the neighborhood successful and the varying perspectives from those who have been in the 'hood a long time and those who have moved here recently.

Thanks for your helpful posting. The summit was great, though not perfect. I was hoping that we could have similar summits elsewhere in Ward 6. I talk about it on my blog Sociology in My Neighborhood: DC Ward 6:
http://sociologyinmyneighborhood.blogspot.com/2011/03/what-near-se-sw-can-teach-ward-6-hine.html