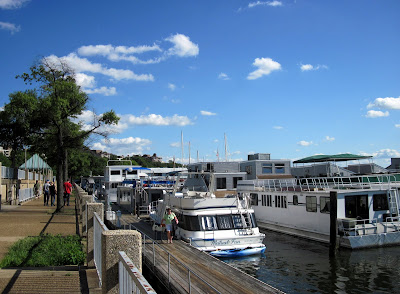 According to the Washington Business Journal, the developers of the new Southwest Waterfront have submitted the stage one Planned Unit Development (PUD) application. It appears that the number of residential units has increased in the PUD submission from when the PN Hoffman-Madison Marquette Waterfront team met with the community in September to present their plans. From the article:

Back in December, the DC Council passed a bill to change the way affordable units will be divided at the Southwest Waterfront development. Under the new law, 30% of the first 500 units of housing will be set aside as affordable housing (half for those making 60% of Area Median Income, or AMI, which is about $109,000 for a family of four, and the other half for those making 30% of AMI). For the remaining 700 units, at least 20% will be set aside as workforce housing (for households making 80% to 100% of AMI). Construction is supposed to get underway on phase one, from 7th Street to 9th Street, by the end of 2012.
Update: The WBJ got outscooped by our local monthly paper...The Southwester!
Posted by SWill at 8:21 PM

The Southwester broke this story days before the BizJournal.

True, but there was no mention in the Southwester article about the increase in the number of residential units planned or reduction in office and retail space in the PUD submission.

Ah, but close examination (or any examination at all-- have you even seen it?) of the actual PUD will show two things:

1. The numbers are very wide ranges, something that is logical considering the market fluctuations which may occur before actual construction and something that the first stage PUD process permits.
2. A large part of that increase in number of residential units is due to the December 2010 request to the city, already reported.

I think that the Biz Journal is pretty much a Johnny-come-lately in this regard, considering that the Southwester had the story a few days before the WBJ, and the neighbors were noticed as early as February 10.