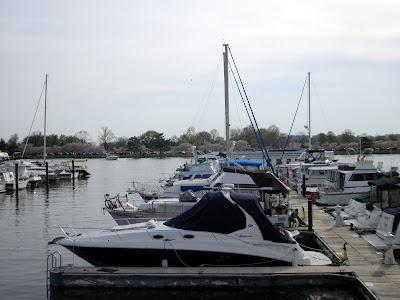 Big plans are underway for the Southwest Waterfront Fireworks Festival, which will take place on Saturday, April 2, one of the official events of the National Cherry Blossom Festival. This is the seventh year that the Washington Waterfront Association has hosted the festival, but this year it will be co-produced with PN Hoffman/Madison Marquette, the developers of the new Southwest Waterfront. The festival will be a day-long affair, starting at 1pm and ending around 8:30pm, followed by the fireworks show at 8:30. In honor of the cherry blossoms, pink lights will be lit along the waterfront, with a special unveiling before the fireworks show begins. Also, the festival will cover a larger area of the waterfront. Three stages will be set up; one at the Gangplank Marina pocket park at 600 Water Street, 7th Street Landing, and the new park coming to the corner of 9th and Water Street.
Activities for every member of the family will be available at the festival. At the Gangplank Marina pocket park, there will be performances by the Navy Band, a color guard, the U.S. Army Old Guard Fife and Drum Corps, and the U.S. Army Band Downrange, based at Fort Myer. This area will also be reserved for community organizations who want to help get the word out about their efforts. Jazz and blues will be performed throughout the day at 7th Street La 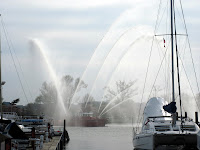 nding. Meanwhile, at the new 9th Street park, there will be vocal and musical performances, including beach-themed music and Nen Daiko, a Japanese-style drumming band from Fairfax, VA. There will be strolling performers along the waterfront promenade, such as face painters, balloon artists, costumed characters, and minstrels. At the parking lot of the Gangplank Marina, there will be a demonstration set up to teach children how to build a toy sailboat, complete with a man-made pond. MPD’s Harbor Patrol will have a booth set up where children can make t-shirts from artwork and a fireboat will parade along the Washington Channel. While the event is family-friendly, there will also be things for adults to enjoy. Planners are in the process of getting permits to allow a beer and wine garden adjacent to 9th Street park. There will be food sampling from local restaurants, as well as food trucks will be invited to line up from the 600 block to 900 block of Water Street.
The Southwest Waterfront Fireworks Festival is the kick-off event for a year full of programming along the waterfront, culminating with the Parade of Lighted Boats on the first Saturday of December. According to Angela Sweeney of Madison Marquette, weekly events at 7th Street Landing will be back again this year, from June 2 – September 25. In addition, several festivals are planned throughout the season (more on that will be announced soon). One item mentioned at the December ANC 6D meeting was the possibility that the Washington Kastles World Team Tennis organization would set up shop on the waterfront for their month-long season in July, since their current home in a parking lot downtown will become a construction zone this spring with the development of CityCenterDC. That deal has not been finalized yet, though. The interim programming of the Southwest Waterfront is being done in anticipation for construction, which is scheduled to get underway by the end of 2012 with phase one of development.
Posted by SWill at 8:07 AM

Just wondering what our DC government will do this year to control the trash and litter. For starters, how about setting up some temporary cardboard litter containers on the sidewalks between the Tidal Basin and the fish market. Last year, SW residents had to team up to cleanup the accumulated trash.

Also, has anyone noticed the deployable condition on and near Maine Ave.?
1) Seven or eight homeless people have taken over the sidewalk under Fourteenth St.
2) Bags full of trash litter the ground in this vicinity to say nothing of the trash that's accumulated on the hill across the street from Pruitt's fish stand.
3) A large tree that blew over during a wind storm back in early January at Ninth and Water Streets has yet to be removed.
4) Shopping carts full of what appear to be the belongings for a homeless person have reappeared east of the Phillips Seafood restaurant.
5) Dead Christmas trees remain in the gutter at Sixth and Water Streets.

Seems to be me that all of this may leave a poor impression on any visitors to our waterfront to say nothing of what the residents are forced to put up with.

Bring back the Shuttle Bug

Spend the Shuttle Bug wasted money on clean up and keeping the area clean.

i also noticed the shopping carts i assume belong to a homeless person. it looks pretty awful. is there anyway these people can be identified...I think there are a few...and maybe suggested to a few homeless shelters.

Thanks for the heads-up on the homeless problem and other issues along Maine Avenue, I will ecalate to our ANC liaison at the Mayor's Office and see what can be done.

Larry/Caity: I gave a community liaison ffrom the Mayor's Office a SW driving tour yesterday which included all of the issues noted above. I don't know if it was just a coincidence, but several DC trucks and some sort of van were under the 14th Street Bridge this morning where the homeless community has developed. I will keep an eye on the other issues, particularly the falled tree and the Christmas tree trash pile, what a needless eyesore that was.

Thanks for your concern---

The trucks under the bridge are doing some type of repair work. They have nothing to do with relocating the homeless.
Also, I forgot to mention one other thing at the east bound Maine Ave ramp onto the the SW Freeway -- the highway sign in the median strip was knocked over three weeks ago and remains lying on the ground.

I'm disappointed that our DC government seems to have gone into winter hibernation. All these issues should have been addressed long ago by attentive DC workers.

Since we are talking about the Cherry Blossom season, can I give my two suggestions for the city:

1. Bring in more, many many many more, police officers or traffic aides to direct pedestrian and vehicle traffic at key choke points. The sheer volume of people makes it nearly impossible to cross certain streets at certain times and makes for many near misses with pedestrians. Also, please tell MPD that if an officer is assigned to an intersection, he or she must be OUT OF THE CAR and actually direct traffic. Simply parking a police car with an officer inside does nothing to facilitate the flow of vehicle and pedestrian traffic.

2. MPD has a commercial vehicle enforcement unit. Use it. The buses that bring folks to the Cherry Blossoms do not have total immunity from city law and DOT regulations. Buses must park ONLY in designated areas and MUST NOT idle at any time while parked. Last year was the worst I have ever seen with multiple buses parked on residential streets with engines running, or using residential streets as shortcuts. Not to mention buses in such poor condition that they were openly leaking all sorts of fluids on the ground.