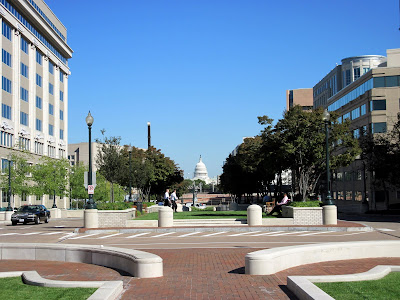 As a part of the Southwest Ecodistrict initiative underway by the National Capital Planning Commission (NCPC), The DC Office of Planning will undertake a study of the Maryland Avenue corridor, as reported in the Examiner. The section of the corridor to be studied stretches from 12th Street to 6th Street. Maryland Avenue is currently disjointed, with a landscaped segment west of 12th Street at the Portals development (pictured above), but abruptly ends east of 12th Street with the CSX train tracks and picks up again east of the L'Enfant VRE station at 7th Street. On the other end of the corridor is the site of the future Eisenhower Memorial. The goal of the study is to reconnect Maryland Avenue and create a mixed use corridor. Here's a link to a video provided by NCPC on the current state of Maryland Avenue.

Update: Here's a link to a live chat done on Wednesday by the Housing Complex blog about plans for the Southwest Ecodistrict. Here's a reminder that the NCPC will be hosting a public meeting about the Ecodistrict on Thursday from 6-8pm at the Whitten Building, located at 1400 Independence Avenue.

At last night's meeting, I learned there is currently underway a study of the costs to deck over the Southwest Freeway west of Ninth Street.

"If you fail to plan, you plan to fail."

Thank you, Mr. Craycraft, for requesting that. I work at the Portals, where we have the one block of Maryland Ave. covered over between 12th and 13th st (roughly speaking). Any progress in covering over the remaining train tracks, as well as the possbility of covering over some or all of the freeway is a welcome thing!

Thanks, DavidSW. Decking over the Maryland Avenue SW section of the tracks is definitely part of the study and in fact the higher priority versus the SW Freeway. Thanks for your concern.
Bob Craycraft

Bob,
First of all thank you for all the great information you have been providing, as well as the active role you have playing as our Commissioner.

I was just inquiring as to what exactly the Millennium Plan means by "decking" over the Southwest Freeway. I am familiar with the concept, however are they referring to simply covering and turning it into a tunnel, or actually creating a "deck" for mixed use pedestrian area or a green space?

If the study determines that building a solid deck over the freeway isn't structurally feasible, might I suggest going the aesthetic route for a covering ---- something like the white tensile fiberglass roof of Denver International Airport? It would contain the sound of the freeway, and add a distinctive/unique/artistic look to the low skyline.