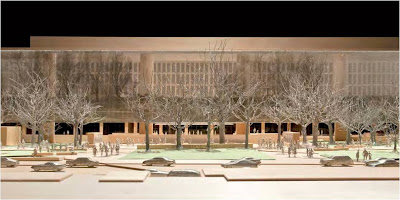 Earlier this month, the National Capital Planning Commission (NCPC) met to discuss the latest plans for the Eisenhower Memorial, which is slated for a four-acre rectangular site across the street from the National Air & Space Museum along Independence Avenue between 4th Street

and 6th Street. The memorial is being designed by famed architect Frank Gehry, which will be his first design that may actually get built in DC (several years ago, he designed an addition to the Corcoran which never got built due to lack of funding). There are three concepts for the memorial with the third option being the preferred design of the Eisenhower Memorial Commission. This alternative, called the Maryland Park concept, calls for Maryland Avenue to be realigned with the axis of the Capitol building but be closed to vehicular traffic; stone block sculptures with quotes from President Eisenhower surrounding a central grove of

sycamore trees; and large woven stainless steel tapestries with scenery from Eisenhower's home town of Abilene, Kansas. The largest tapestry, at 550 feet, would essentially block the view of the U.S. Department of Education headquarters for visitors to the memorial, a building not universally loved for its 1960's architecture. Behind the large tapestry between it and the Department of Education building will be a 50-foot wide promenade, called the LBJ Promenade, which will have benches and landscaping and will serve as an access point to the memorial.
When the NCPC met, there was some concern about the design. In reviewing the memorial plans, the NCPC was using seven design principles created in 2006 to guide the site approval process. Those design principles, from the NCPC's Commission Action, are as follows:

1. Preserve reciprocal views to and from the U.S. Capitol along Maryland Avenue, SW.
2. Enhance the nature of the site as one in a sequence of public spaces embellishing the Maryland Avenue vista.

3. Create a unified memorial site that integrates the disparate parcels into a meaningful and functional public gathering place that also unifies the surrounding precinct.
4. Reflect L’Enfant Plan principles by shaping the memorial site as a separate and distinct public space that complements the Department of Education Headquarters and other surrounding buildings.
5. Respect and complement the architecture of the surrounding precinct.
6. Respect the building lines of the surrounding rights-of-way and the alignment of trees along Maryland Avenue.
7. Incorporate significant green space into the design of the memorial.

According to the NCPC, only design principles #2 and #7 are incorporated in the plans for the Maryland Park option, which means Gehry has a lot of work to do before the NCPC will give site approval.
Images courtesy of the National Capital Planning Commission.
Posted by SWill at 11:11 PM

Am I the only one who feels that Frank Gehry mailed it in on this one? I'm all for simplicity, but this just seems too bland....

I, too, am not at all impressed. I find it ugly and a huge mistake.

It's kind of telling when the most interesting feature of an architectural mockup is actually the miniature futuristic-looking cars.

Or maybe that was Gehry's goal given that Eisenhower gave us the interstate highway system...

Speaking as a private citizen and a fan of President Eisenhower, I agree with all of the comments above. A complete zero that looks more like an abandoned drive-in movie, admittedly with a CinemaScope screen.