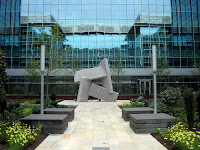 The Federal Housing Finance Agency (FHFA) announced yesterday that it will be consolidating its three office locations in NW in order to move to Constitution Center, which is quickly becoming the Federal Government’s version of Wall Street since the SEC, the OCC, and now FHFA will occupy space at the secure campus. By the way, FHFA regulates Fannie Mae, Freddie Mac and the 12 Federal Home Loan Banks. According to the press release, FHFA employees are scheduled to start moving in November. There’s no word yet on how much space they will be occupying at Constitution Center or how many employees will be moving. However, I would imagine that the office building is now pretty close to fully leased with this signing.
Update: Here's some additional information about the FHFA lease via the WBJ. The FHFA will lease 335,000 square feet at Constitution Center and over 550 people will be moving to the office complex. Although there is some secrecy behind the lease signings, the WBJ calculates that up to 115,000 SF is left to lease in the 1.4 million SF complex.

DCMud gives an update on plans for Eisenhower Square, the memorial planned for President Eisenhower across from the U.S. Department of Education headquarters. The National Capital Planning Commission (NCPC) will be reviewing three refined alternatives for the memorial, designed by Frank Gehry at their monthly meeting on Thursday. The alternative favored by the Eisenhower Memorial Commission is the one with limestone columns on either side of a large metal woven tapestry blocking the Department of Education building from view and has a grove of sycamore trees in the center. According to The Washington Post, Gehry stated that the large tapestry may show an image of Abilene, Kansas, Eisenhower's boyhood home.
Above is a rendering of an earlier version of the preferred vision for Eisenhower Square, courtesy of the Eisenhower Memorial Commission.
Posted by SWill at 10:20 PM

Call me old-fashioned, but why can't Ike, and others, get a simple statue to honor their work. A simple statue surrounded by a nice plaza.

Why does every memorial now have to be a park/public modern art exhibit/museum?

Besides, shouldn't the size one's memorial roughly equal their contribution to our Republic? Ike will have more square footage than Abe? Don't even get me started on the Reagan monstrosity (and airport). How about turning all of Anacostia Park into a gian memorial for Franklin Pierce?