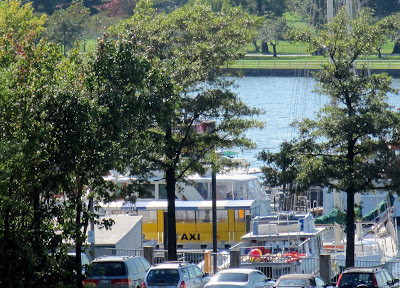 It's been several months since the announced opening date of June 2010 came and went for American River Taxi (or ART for short), a water taxi service that would serve waterfront destinations in the District, including the Gangplank Marina at the Southwest Waterfront, Washington Marina along the Georgetown Waterfront, and Diamond Teague Park in Near SE. This service has not gotten underway yet, but according to the company's website, online ticketing and ticket kiosks will be available this Spring. Travel times between stops will be between 20 and 35 minutes and taxis will depart at least every 35 minutes.
Photo: An ART water taxi was spotted on the Southwest Waterfront during Arena Stage's Homecoming celebration in October 2010.
Posted by SWill at 10:29 PM

I did spot a ticket kiosk at the Waterfront over by Cantina Marina, probably around when you snapped the photo of the taxi. So, it seems like infrastructure's in place.

Any word on how much tickets will cost?

Any chance they will work with WMATA so that they can accept SmarTrip?