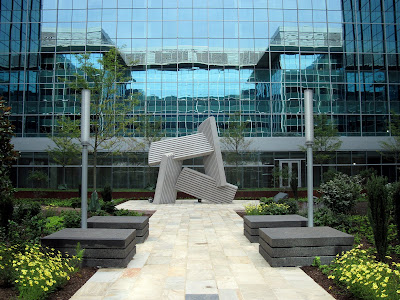 The Washington Business Journal reports that the Office of the Comptroller of the Currency (OCC) will lease between 600,000 -650,000 SF of space at Constitution Center, the vacant 1.4 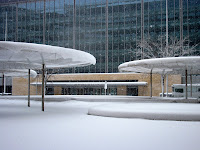 million SF office building located on top of the L'Enfant Plaza Metro station at 400 7th Street. By the fall of 2012, about 1,000 employees will be moving to Constitution Center, some from another location in Southwest at 250 E Street. Meanwhile, the WBJ also reported the inspector general of the Securities & Exchange Commission (SEC) is opening a formal investigation into the lease signed by the SEC last year for 900,000 SF in the same building, but then reported that 600,000 SF was excess space after it realized it didn't need as much space as originally planned. Also under investigation by the inspector general is the planned move of 740 SEC employees to Constitution Center this summer from other offices.
Posted by SWill at 8:00 AM

The second picture is of the HUD building accross the street from Constitution Center, BTW.

Anonymous: Take another look at the photo. It's a view of Constitution Center from across the street.

It seems like we'll all be dead by the time somebody actually goes ahead with their lease and moves into the Constitution Center.....

If things go as planned though, it should be interesting to see the suddent influx of workers into both the Constitution Center and the CFL.