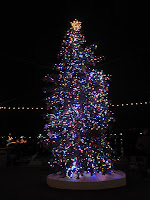 On Saturday, the holiday season gets underway in the neighborhood at 7th Street Landing with the tree lighting ceremony and Parade of Lighted Boats along the Washington Channel. The festivities get underway at 4pm and last until 7pm. Music will be provided by Strykers Pose, refreshments by District Doghouse (owned by the proprietors of Cantina Marina) and there will be complementary photos with Santa, so bring the kids! 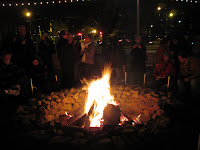 Update: Included are a couple of photos from the event. The photo at the top of the post is the Christmas tree that was lit up in the middle of 7th Street Landing. One of the lighted boats in the parade passes by in the background. There was a large fire pit installed to help keep people warm as they enjoyed the festivities. Free smores were provided as well. In case you didn't get a chance to see the parade, throughout the holiday season, some boat owners will keep their lights on in the evenings.
Posted by SWill at 6:45 AM

I was there with a friend from my condo, and it was a lot of fun.

I'm glad I went. It was a unique SW experience, with the crackling fire pit, and the beautifully decorated boats slowly motoring up and down the Channel. The live band was quite good, and the whole atmosphere was most enjoyable.

We bumped into a really nice guy who also lives in our condo, and the three of us had a good time chatting. All in all, a very pleasant evening!

agreed--I had a really nice time. It was good to see a mix of folks clustered around the fire pit, the band made it feel like a resort, and any gathering that includes free smores is a success in my book. I'm curious/excited/apprehensive to see what the neighborhood is like in future years, but for now I think it's awesome and I'm so glad it's mine!

I took the chance to attend this community event, and I'm glad I did!

Alas - I only saw 2 PPC neighbors there. Certainly we can all embrace our Southwest-ness and support and enjoy such events! It was a great time, and I feel bad for those who didn't walk a mere 3 blocks to such a fun event!