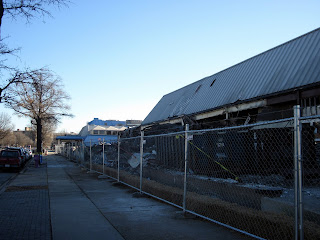 Earlier this week, demolition began at the Hogate's building, located along the Southwest Waterfront at 800 Water Street. At this month's ANC 6D meeting, David Roberts from the District government said permits would be pulled the week of December 14th to demolish the building and it would be gone by mid-January. Judging by the photo at the top of this post, they are on schedule. Demolition will pave the way for an event space at the site next Spring, including the possibility that the Washington Kastles World Team Tennis organization will have a temporary "stadium" and play there in July. The event

space will be temporary, of course, since the section of the waterfront from 7th Street to 9th Street is slated for construction by the end of 2012. The first event scheduled for the new event space will be festivities surrounding the National Cherry Blossom Festival, which will take place from March 26 - April 10, 2011. In prior years, the Prelude to the Fireworks festival and fireworks show have taken place on the Southwest Waterfront. 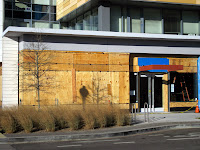 Meanwhile, work continues at Waterfront Station to build out spaces for Station 4 and Z-Burger, which will open at the 1101 4th Street building in the first quarter of 2011. Station 4 will occupy the southeastern corner of the building and will be approximately 4,000 square feet. Six large glass doors have been installed to allow access to the outdoor seating planned for the restaurant. In total, there will be space for about 200 diners. Z-Burger will be located 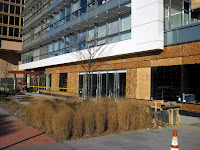 on the southwest corner of the building. Lots of glass has been put up at both restaurants, so it looks like there will be ample natural light in those spaces. After these two restaurants open, there will still be four retail spots available at the first phase of Waterfront Station - one of which will be for a bank.
Posted by SWill at 8:37 PM

Any word on when Zanzibar will be demolished?

It's my understanding the Zanzibar building will be there at least two more years, and will serve as a support structure for events held at the temporary arena being built where Hogate's is today.

By support structure, I mean use of the large indoor spaces, restrooms, and food and beverage facilities.

Eventually, the building will be razed for new development.