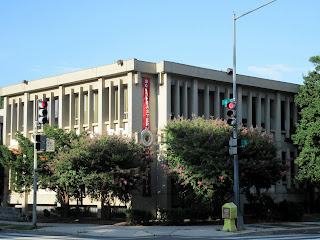 A couple agenda items at last night's ANC 6D meeting dealt with Southeastern University, which closed its doors in August 2009. The first item was a resolution by Commissioner Sobelsohn to remove -SEU from the name of the Waterfront-SEU Metro station. The SEU campus and name was purchased by the GS Graduate School earlier this year. GS Graduate School has been mum on their plans for the building at 6th & I Street, but it appears that the school building may now be on the market. As a result, the ANC voted 3-0-1 to remove SEU from the Metro station name.
The second SEU-related item was that Jack McCarthy from AppleTree Early Learning Public Charter School mentioned that the school is exploring the option of expanding its presence in Southwest by bidding on the SEU building. Currently, AppleTree does activities at Amidon-Bowen Elementary and Riverside Baptist Church locally, but does not have sufficient space to do all its programming. AppleTree also has a campus in Columbia Heights and Hill East. Cost estimates for renovating the SEU building for use by AppleTree is approximately $150/SF with about a third of the cost needed to upgrade building systems. Under the proposal offered by McCarthy, no floors would be added to the building, but some of the parking lot would be covered with playground equipment. AppleTree hopes to formally place their bid by mid-December and depending on the selection process, if the school is selected by GS Graduate School, McCarthy hopes to have some classrooms available by August 2011 when the new school year begins. After some discussion by the Commissioners and positive audience comments about the SEU building remaining a school under this proposal, the ANC voted 5-0-1 to support AppleTree's bid.
Posted by SWill at 10:04 PM

(dancing around in my office, or thinking I should) -- I am sooo glad that they voted to remove "SEU" from the metro name. They can get local teens to scrape off "SEU" from metro signs, as they have already shown that they can :)

I believe this is a huge step forward on improving education for Southwest children, as well as rehabilitating what is becoming an eyesore and public nuisance in the heart of 6D01.

Thanks for keeping us updated, Will.

That is really terrific news. I really love the neighborhood and am excited to see amenities like this arrive which help me be able to envision staying here for years even if i had a family and so forth.

I really hope that whoever buys the hideous SEU building will perform renovations to the exterior of the building in addition to the interior. It looks like a prison. It is certainly not a welcoming place for learning, or anything else for that matter.