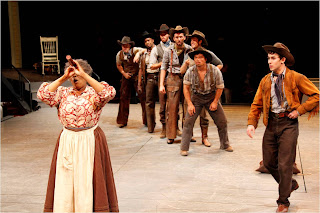 According to a press release from Arena Stage, the first production since the debut of the Mead Center for American Theater - Rodgers & Hammerstein's "Oklahoma!", directed by Artistic Director Molly Smith, has broken several box office records. As a result, the show has been extended until December 30th, adding six performances to the schedule. Records broken by "Oklahoma!" so far include: 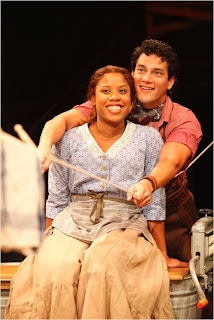 Since its debut, "Oklahoma!" has received rave reviews from several publications, including The Washington Post, Bloomberg News, DC Theatre Scene, Washington Life Magazine, The Baltimore Sun, Washingtonian, and DCist. There is also talks of it possibly making it to Broadway. I saw the musical a couple weeks ago and was impressed (my mom enjoyed it as well). This was the first time I saw "Oklahoma!", but I did take note of a few things that stood out for me. The cast was multiracial - the main characters including Aunt Eller, Laurey and Curly were played by two African Americans and a Latino, respectively. The dance numbers were done very well, especially Kansas City and the Dream Ballet. I thought the peddler and Annie were the funniest characters IMHO, although the actor who portrayed Annie still needs to develop her voice a bit (she's only in high school, so I'll give her a pass). Coincidentally, an old version of "Oklahoma!" was showing on cable last weekend (TMC I think) and I watched some of it - I enjoyed the Arena Stage version more.

There was a petting zoo outside of Arena Stage along 6th Street when I went to the Saturday show. The petting zoo will be set up for the next two Saturdays before the matinee performance between 12:45pm and 1:45pm. To buy tickets for "Oklahoma!", visit Arena's website or call 202-488-3300. Have any of you seen it yet? What did you think?
Photos courtesy of Arena Stage
Posted by SWill at 10:00 PM

Oh, it was way fun. A really nice way to open the new season. I've been a season ticket holder for the last six or seven years and my family longer, more like 30 (probably increased my familiarity with the neighborhood and, at some level, influenced my decision to move down here when I came back to DC) - we were all kind of tickled to be back in the new space. It was a very polished production and, again, just a ton of fun.