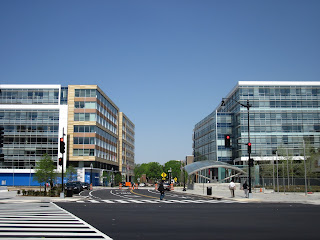 There was a lengthy discussion at Monday's ANC 6D meeting about the intersection of 4th & M Streets, which has been the scene of three car accidents involving pedestrians in the past year. Some of the ANC commissioners met with DDOT officials to discuss pedestrian safety and as a result, some changes are on the way. Here is an excerpt from an email DDOT Director Gabe Klein sent to a local list-serv today on the issue:

We are still pursuing the “complete street” plan on M Street and would like to move beyond concept and to design. There has been back and forth on whether to have shared bus/bike lanes and other questions. I am asking Jamie Henson for a complete run down. After the accidents, I talked to US DOT Secretary Ray LaHood personally about the concept, and he wholeheartedly supports it. In addition, we made safety improvements in the area including eliminating right turns on red at key intersections.

The "complete street" plan Klein is referring to is a plan spearheaded by Ward 6 Council member Tommy Wells and the Capitol Riverfront BID, which was presented to the community in March. In the interim, two resolutions passed unanimously by the ANC related to the intersection - one would direct DDOT to remove five parking spaces on the south side of M Street between the entrance to Tiber Island (430 M Street) and the intersection of 4th & M. The reason for removing the parking spaces was motorists can't see the "Right Turn Only" sign when approaching 4th Street and will give them time to get in the right lane before making a right onto 4th Street off of M Street. The second resolution would direct MPD to have officers patrol the intersection for two hours a day every day for a week to observe traffic violations. In addition, it was revealed by Naomi Mitchell from Wells' office that the council member will help the ANC get their desired traffic study of the M Street corridor, which the ANC has been requesting for years since a lot of development has been occurring (or are in the planning books) for the corridor without a comprehensive plan for dealing with traffic on M Street (from the 14th Street Bridge to the 11th Street Bridge).
Posted by SWill at 11:24 PM

Hmmm, last week there was a commission of ANC and DDOT officials observing the traffic patterns at 4th and M. While they were there, they observed 7 illegal u-turns, one made by a woman who has an email listserve in the neighborhood and has recently railed against unsafe driving at that intersection! Silver-haired African Amer. woman with green eyebrows. Residents know who that is...

The illegal U-turn by drivers heading westbound on M street has always been a problem there -- even before the makeover. Though during construction, they removed the no U-turn sign, and I don't remember seeing it there anymore. If it is still missing (as I suspect), I recommend they put it back up. I remember a number of near collisions with people heading northbound on 4th street tried to turn right on M.

Tell that to the silverhair maven with the attitude.

Does anyone know why DC cops are so reluctant to give moving violations? Every day I see red light and stop sign running and they never make a move.

There is plenty of room for improvement of the traffic situation around Waterfront's 4th street. The traffic light settings are still far from optimal. Closing part of 4th for through traffic would make the metrostation safer for pedestrians.

The bikelanes on 4th are a joke now; shoppers consider them parking spots, and the drains are dangerous. Nice set up for the DC bikesharing station.

@Anonymous: "Closing part of 4th for through traffic"

What exactly are you suggesting? There's only one lane in each direction, which would make it hard to justify any sort of closing of the street. Plus, unless you consider traffic to the parking lots, all traffic *is* through traffic. Do you mean closing part of 4th *to* through traffic and not *for* through traffic?

Why would suggest that? Part of the whole design of Waterfront Station was specifically so 4th Street *would* be open.

Furthermore, I'm really curious why you think the area near the Metro station is unsafe for pedestrians? Crossing M Street can sometimes be dicey, but the area around 4th Street is pretty well designed for foot traffic. The colored, textured, slightly raised pedestrian crossing is about as good as you're going to get.

Frankly, I'd rather the police start patrolling the area for crime instead of traffic violations. There have been several muggings/assaults in the area, and in fact someone with a gun attempted a home invasion/robbery. I understand that traffic violations are a dangerous problem, but I think the cops need to focus more on crime in the neighborhood.

@postit -I'm not a traffic engineer but the way the road designed now is very chaotic. There are always cars parked in the bike lanes and many people 'forget' to stop for the crossings. Trucks parked along the streets block the view on the pedestrian crossings.

What I could think of is to have parking on one side of the street, maybe diagonal instead of parallel parking (as on Sundays on 10th & P NW). Make a contraflow bikelane (as on 15th NW) and make the traffic one-way. Just separate the different flows of traffic better.

Okay, no offense, but please don't become a traffic engineer.

- One-way traffic will only spread the (supposed) chaos to the rest of the neighboring streets (especially the ones that go in the opposite direction)
- Unlike parallel parking, diagonal parking requires people to back-up *against* the flow of traffic in order to leave the spot. This will further add to the chaos for cars. It will also add greater danger to bikers because you have better visibility of oncoming cyclists when pulling out of a parallel spot than a diagonal spot (which is essentially blind).
- Diagonal spots increase the distance between the traffic lane and the curb (where traffic signs are). Therefore, a tall diagonally parked truck will only block drivers' views of crosswalk signs MORE than they would when parked parallel.
- Lastly, drivers' respect for pedestrians in crosswalks has less to do with the built environment than it does with simple courtesy. While there are definitely things you can do to encourage it, at some point you've maxed out what you can do. In this case, unless we're going to put flashing lights at crosswalks, the current situation is about as good as it gets. Now, it's a behavior flaw, not a design flaw. Same goes for parking in the bike lane.