Townhouses to be Added to St. Augustine's? 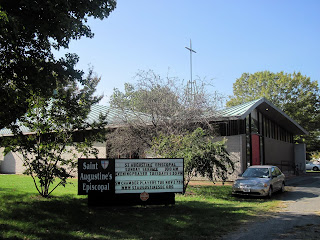 It was also mentioned at last Monday's ANC 6D meeting that PN Hoffman is in negotiations with St. Augustine’s Episcopal Church at 6th & Maine Avenue to build 92 townhouses on their property and the church would move into a new sanctuary on-site. This pending agreement is not officially a part of the Southwest Waterfront redevelopment, though. PN Hoffman and other developers in the city have been partnering with churches lately to build on excess land that churches own. Near the MLK Library downtown, PN Hoffman partnered with First Congregational United Church of Christ and Skanska to construct an office building, which is currently under construction. Another example can be found in Southwest, with St. Matthew's Evangelical Lutheran Church partnering with Trammell Crow to build the church a new sanctuary and construct a multifamily building at 3rd and M Street. That project has been stalled by the economy and remains a vacant lot, save for a garden and seasonal Christmas tree lot.
Posted by SWill at 8:52 AM

St. Matthews is at Delaware and M, not 3rd; 3rd St doesn't cut across M on the south side.

About the garden that was mentioned - is this land available for an informal community garden? Did the current gardener get permission or is just squatting? I'd love to have a community garden.

Who do we contact about sales in this new townhouse community?

The community garden was run by the pastor at St. Michael's. For a small fee, you got a plot and keys to the garden. Contact the church for more information. Whether they have the garden next spring will depend on the construction schedule.

Anonymous @ 12:30pm - There is no agreement yet between PN Hoffman and St. Augustine's, so it's not even certain that this planned project will move forward. If it does, then I'm sure PN Hoffman will have information about sales. I'd imagine these townhouses won't be built for several years since that area of the waterfront isn't scheduled for redevelopment until the 2016-2018 period.