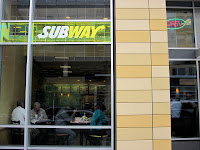 Slowly, but surely, retail has started opening along 4th Street at Waterfront Station. First came Safeway (with a Starbucks) in April, then CVS in July. Last week, Waterfront Cleaners opened its doors and tomorrow, Subway will be having its grand opening. Hours of operation for the sandwich shop will be Monday - Friday 6am to 9pm, Saturday 8am - 9pm, and Sunday 9am - 9pm. Next up will be Z-Burger and Station 4. I noticed that work started on both storefronts last week - both of these restaurants are supposed to open in 2011. There are rumors that TD Bank will be replacing Bank of America, but I haven't received confirmation yet from the developer. Excluding space for the bank, there are at least three retail spaces available.
Update: Below are a couple photos taken on Wednesday during lunch. 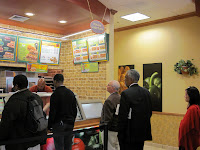 Wallpaper gives the impression that the walls behind the counter are brick, but they're not. 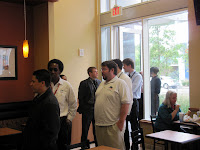 The line was out the door during lunch.
Posted by SWill at 10:03 PM

Awesome. It's so strange that there's nothing else in the area.

well ..its something lol. can't compare to a real sub shop though. oh well.

Disappointing to see two Subway plastic bags floating in the duck pond on 6th Street yesterday. That didn't take long. Tommy Wells, shouldn't we get 5 cents each from the bag tax?