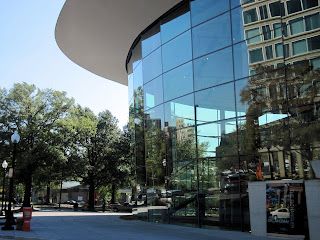 Starting at midnight on October 23rd, a block of 6th Street from Maine Avenue to K Street will be closed for 24 hours in order for Arena Stage to hold its Homecoming celebration. However, there will be a 20-foot emergency lane created for traffic to move northbound - allowing residents of The View at Waterfront apartments to leave their homes by car if they show their parking pass to officers stationed along 6th Street. Only residents of the south tower will need to access 6th Street, since the north tower's parking lot has an entrance on K Street. Circulator and Metrobus will be rerouted during the street closure - details on the alternate routes will be posted once I get them.
About 7,000 tickets for Homecoming were gone after less than an hour of being available on 10/8 when they were released. For those who weren't able to get tickets, several hundred more tickets will be available at the box office starting at 10am on Saturday. Tickets are only required for tours inside the facility and for talks/performances in the theaters - no tickets are needed for outdoor activities.
Posted by SWill at 10:59 PM