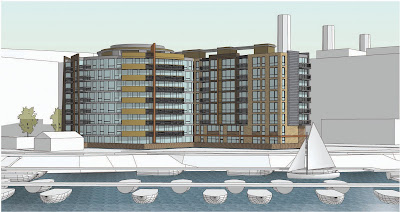 At Monday's ANC 6D meeting, there was supposed to be a presentation on Marina Place, a new condo project planned near the Anacostia River in Buzzard Point. However, the presentation has been postponed because there was a last minute change to the parking amount planned. As a result, the developer (Buzzards Point LLC) postponed the Zoning Commission meeting scheduled for November 4th - the new date will probably be sometime in January. There will be a total of 99 units (nine of them will be affordable units) and 2,047 SF of ground floor retail at Marina Place, located at 95 V Street. The developer anticipates a coffee shop may occupy the retail space.
Eric Colbert and Associates designed Marina Place to maximize river views. Angular glass walls will allow residents uninterrupted views of the Anacostia - the site has 345 feet of frontage along the Buzzard Point Marina. With only a handful of residential projects in the city near the water, Marina Place will offer one of the first opportunities for city dwellers to live next to a marina - that is until the Southwest Waterfront is redeveloped and housing is built in The Yards in SE. Currently, the site is located in an isolated stretch of Buzzard Point, near the Coast Guard headquarters (at least until they move to St. Elizabeths in SE) and the Buzzard Point Plant. However, there are plans to transform Buzzard Point from a primarily industrial neighborhood into a residential enclave along the waterfront. Last November, the American Planning Association, upon the request of Ward 6 Council member Tommy Wells, put together a pro-bono Planning Assistance Team (PAT) to study the Buzzard Point neighborhood and make recommendations on how to improve the area. The final draft of the plan was supposed to be released in March, but it hasn't been completed yet. Construction won't begin at Marina Place until at least 2013, but this project may be one of the early adopters of the PAT's plan in this pioneering area of Southwest. (Rendering is courtesy of Buzzards Point LLC)
Posted by SWill at 10:37 PM

Reading between the lines, I hope the ANC's parking concerns didn't just delay this project by two months.