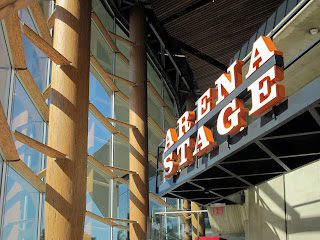 On Thursday, I took a media tour of Arena Stage, which is getting ready to reopen after a two-year renovation and expansion of its campus. Arena Stage has increased in size from 88,000 square feet to 200,000 square feet and has added a third theater, along with a common lobby, concessions, Cafe, outdoor terrace, costume and paint shop, upholstery shop, rehearsal space, and administrative offices. Edgar Dobie, Managing Director of Arena Stage stated in his opening remarks that "theaters are like houses of worship" which is the sort of feeling one gets when walking through this light-filled complex. Below are some photos I took of the common areas during the tour. 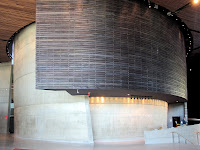 (Left) Here is the exterior of the Kogod Cradle, a new 200-seat theater. The concrete cylindrical theater holds up the entire campus. Back of house operations are located adjacent to each theater in order to ease the movement of props, sets, etc. 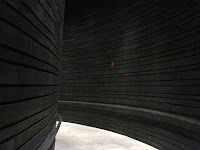 (Right) A winding pathway leads to the interior of the Kogod Cradle theater. Molly Smith, Arena's Artistic Director, said that "The Kogod Cradle was the gleam in my eye" when she imagined how Arena would be expanded. The smaller theater is designed to foster experimental theater. 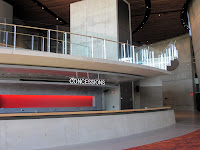 (Left) This is one of the concessions areas, located on the ground level of the Kreeger theater, or the "workhorse" as Smith calls it. The Kreeger serves as a theater, restrooms, concessions, and the Cafe is located on its roof. 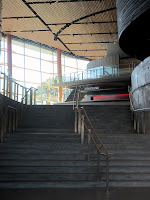 (Right) The stairway leads from the main entrance to the concessions area. A glass elevator is also available for use by disabled patrons. In the old theater complex, there were no elevators, so Arena staff had to carry disabled patrons through areas that weren't wheelchair accessible. Also visible in this photo is the wood ceiling, which stretches throughout the complex. Sound proof tiles were originally going to cover the ceiling, but the decision was made about seven months ago to use wood instead. 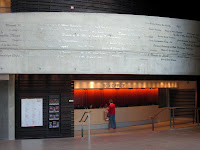 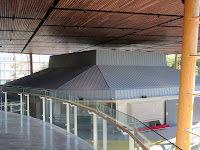 (Right) Here is a view of the Fichlander theater, which is the oldest theater in the complex. The interior of the Fichlander has been restored - we weren't allowed to take photos inside the theater because it's in the process of being prepped for Oklahoma! The original fire escapes in the exterior of the theater have been maintained. Architect Bing Thom said that manequins may be positioned on the fire escapes. 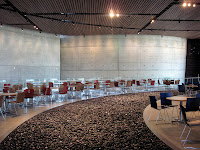 (Left) The Cafe is located on the roof of the Kreeger, to be operated by José Andrés Catering with Ridgewells. Seating is cafeteria-style with 200-250 seats. River rocks are used on sections of the roof that could not support the weight of several hundred people. These areas will be fenced off to avoid a liability issue with people possibly tripping on the rocks. 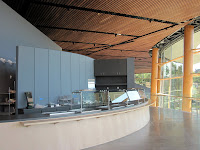 (Right) This is where patrons get their food from The Cafe, which is around the corner from the seating area. 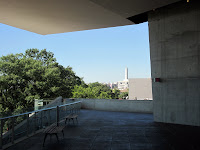 (Left) This is a view of the Washington Monument from the outdoor terrace that's connected to The Cafe. The public will have access to the terrace from a ramp that goes down to Maine Avenue. 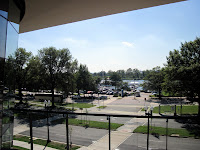 (Right) Here is a view of Maine Avenue, Water Street, and the Southwest Waterfront from the terrace. If the plans released last week by the Hoffman-Madison Marquette Waterfront team come to fruition, there will be a traffic oval on Maine Avenue and beyond will be M Street Landing.
Posted by SWill at 10:02 PM

A enormous improvement to our community, but I am so disappointed in this hidden cafe that I had hoped would be a new community dining option. How awful to be on the waterfront with these great glass walls and the only place that people can sit down and relax is a windowless space.

If you go inside it isn't as windowless as it looks from that pic. the wall behind the seating area is part of the giant glass that faces Maine Ave

The whole place reminds me of nothing so much as the Hilton Hawaiian Village in Honolulu. I hope they have mai tais at the snack bar.