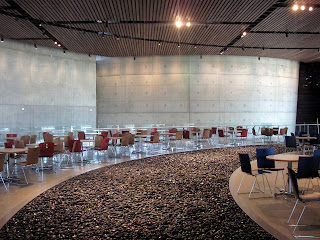 As mentioned previously, Arena Stage has selected José Andrés Catering with Ridgewells to operate the Café at Arena Stage, now called Next Stage by José Andrés. The first menu has been determined - it will be customized to what is currently being performed on stage. The current menu was inspired by Oklahoma! and every tongue confess, since these are the two productions that will debut at Arena. Some of the menu items include entrees such as: Bison Short Ribs and Wild Turkey Meatballs, with sides such as Potato Puree, Oklahoma Succotash and Yellow Hammer Cornbread. Other menu items include soups, salads, paninis, deserts, and specialty cocktails. In addition to the regular menu, there are Pre-Theater Packages, Jose's Box Lunch, Concessions, and Grab and Go options. The café will be open starting 2 1/2 hours before performances begin, but will be closed after shows. It will also be open to the public - access is available from Maine Avenue. Concessions will be open 30 minutes prior to the start of performances and will remain open during intermission and for an hour after shows. Next Stage by José Andrés will debut on October 23rd during the Homecoming Grand Opening Celebration.
Posted by SWill at 8:18 AM

This reminds me of the bunker tour at the Greenbrier. Yuck.

I like the new menu. Looking forward to checking it out. Noticed the concession prices are beyond cheap when it comes to DC entertainment standards.

They call it "most audacious building in washington, dc"

Oops! I meant slate.com not salon.com