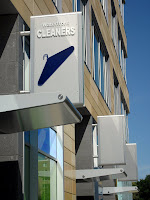 Signage has appeared above the entrance to Waterfront Cleaners at Waterfront Station. In addition, hours of operation have been posted on the door. Waterfront Cleaners will be open Monday - Friday from 7am to 7pm and on Saturdays from 8am to 5pm. It will be closed on Sundays. Since signage is now up and based on recon from some readers, it appears that the cleaners is almost ready to open - perhaps before the end of the month. When the retailers were first announced in June, Subway was slated to open in September, but it looks like Waterfront Cleaners may open before the sandwich shop.
Update: I heard from Z-Burger that they won't be opening until 2011. I'll let you know once they announce a specific date.
Update #2: The franchise owner of Subway is in the process of getting inspections and should open in two weeks.
Posted by SWill at 6:52 PM

What's the latest on the opening date for Z Burger?
Also, any new info on when TD Bank will open?

L. Impett: See my update on information about Z-Burger. I have no details on TD Bank or confirmation yet that it will be opening at Waterfront Station.

It's too bad about the zBurger delays...I'm not a huge fan of burgers, but their long milkshake menu would have been awesome during this long, hot summer!