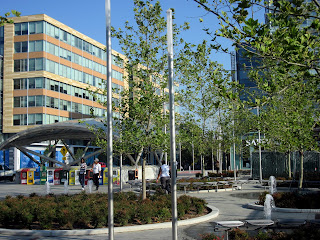 There’s an article in today’s The Washington Post about the redevelopment of Southwest. The basic premise of the article is that Arena Stage’s design has the potential to change the way the rest of the waterfront will be developed, which until now, according to the author, has been “desultory” in architectural design. From the article:

Bing Thom's new building demands better neighbors. And it calls for a more holistic approach to the waterfront -- more porous and open. There are not enough details in the existing plans for redevelopment of the blocks nearby to be sure that it will get what it deserves. The city and its chosen developers, PN Hoffman and Madison Marquette, have big plans for the waterfront just opposite the Arena Stage building, but will it be overbuilt? Will views be maintained? Or will it turn the waterfront in on itself, surrounding the marina and public plazas with structures that are so big they encircle the space, creating an insular, commerce-heavy, over-produced "urban space" that is in fact a giant suburban shopping mall?

The Hoffman-Madison Marquette team will be having a community forum this Wednesday to reveal more detailed plans about the redevelopment of the Southwest Waterfront, starting at 6pm at Arena Stage. I hear that there will be new renderings revealed and will get those up on the blog once I receive them next week.
Other encouraging signs of redevelopment mentioned in the article include the reopening of 4th Street and Waterfront Station, as well as plans to create a “grand public” stairway to connect the 10th Street Overlook with the Southwest Waterfront (a temporary staircase, that may last 10 years, will be built in the interim). Others have shared the same sentiment with me that the area near 4th & M has come alive since 4th Street reopened and the new Safeway made its debut in the spring. With more retail making its way to Waterfront Station, the area will become even more vibrant in the months to come (if only the retail could get open faster!). However, the Southeast-Southwest freeway remains a barrier that isolates Southwest from the rest of the city. Another barrier mentioned in the article is the Department of Energy’s Forrestal complex, which straddles 10th Street in front of the Smithsonian Castle. There are plans from the National Capital Planning Commission to redevelop the 10th Street corridor, along with other areas of the Southwest Rectangle described in its Monumental Core Framework Plan.
Update: There is a special section in Sunday's The Washington Post about Arena Stage at the Mead Center for American Theater and its impact on the city (Southwest in particular). Several related articles are in the feature, including the one mentioned above, how Arena Stage will transform the theater scene in the city, a profile of architect Bing Thom, the transformation of Southwest, and the building's design. In addition, there are photo galleries, a guide, and a video tour (see below).
Posted by SWill at 9:19 AM

That's all well and good but a neighborhood cannot be fully transformed until its residents learn to respect their environment. No, I'm not talking about the residents who already do. I'm talking about the ones who drop trash on the ground without a second thought and participate in other negative behaviors (crime, theft, vandalism, etc.) that affect us all.

I second Anonymous' comment above, we can do what we want to dress up our neighborhood but unless something is done about the crime and vandalism issues it will just go back to what it was. Don't forget that we are really back where we were in 1969, with Southwest full of hope and promise and sparkling new buildings.

It is a crime to litter, with a $300 penalty, but just try and find an DCMPD cop who will issue a ticket.