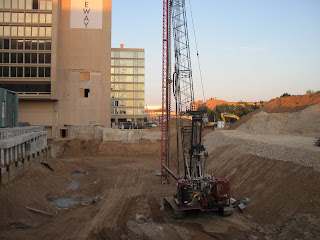 The old Safeway at Waterfront Station is now just a memory...what is left is a large hole in the ground, as seen in this photo. Eventually, there will be an office building on the site, but there is no timetable available for when it will be built. The planned office building will not have ground-floor retail, but the other new buildings planned at Waterfront Station will all have ground-floor retail, according to the development map on the project website. There will also be a fenced outdoor seating area for Safeway patrons that should open next year. Speaking of retail, there is no word yet from the developers when the other retailers at the project will open their doors, although Station 4 is supposed to open in the first quarter of 2011. Once I hear about other retail opening dates, I'll let you know!
Posted by SWill at 10:06 PM

Great to see you posting again Will. Hope you had a great vacation!

I was checking out the demolition site "hole" on my way home. I may be wrong, but it appears that they dug the deep rectangular hole to prep the base to start a new foundation. What gives me that impression is that they appeared to have piled in a retaining wall (see the left side of your picture) which is similar to what was done to begin the DC Crime Lab building on School Street.

This wouldn't make sense though as Forest City hasn't given any indication that Phase II is a go, but they definately seem to be moving beyond basic demolition clean up at that site.

Hopefully we can root out some more info soon.

We, as a community, need to push for ground level retail in this new building. To have one of the premier intersections in the entire SW quadrant with only "dead" office windows would be a tragic waste. Stay tuned.

As for the opening of the other retail spots, I do not know. But I walk by the Subway and the Cleaners every morning and they always have their door open so I take a peek. Both have their flooring in. The bread ovens have been brought in and the counter has been installed. For the cleaners, they have already painted the walls and the hanged clothes track has been installed into the ceiling. The counter has also been installed. I would assume that barring any slowdown in work, they should be done by the end of the month or so. When they actually open is anyone's guess. Good to see the blog up and chuggin' again