Live-Aboards in Peril on the Waterfront? 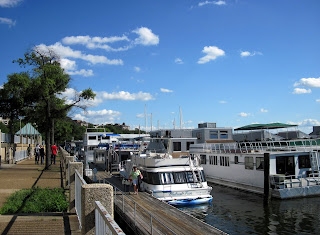 The Washington Post follows up their coverage of Arena Stage and development in Southwest with a story about the live-aboard community at the Gangplank Marina, whose future is uncertain as the Southwest Waterfront is getting ready to be redeveloped. According to the article, the houseboat owners at the Gangplank Marina, which is the only live-aboard community in the District - about 150 people live there, haven't received a transition plan yet from the Hoffman-Madison Marquette team, who will be undertaking the redevelopment of the Southwest Waterfront. However, next door at the Capital Yacht Club, a transition plan is already in place. Despite the lack of a transition plan, the developers claim that Gangplank Marina will not disappear. From the article:

Shawn Seaman, PN Hoffman's project director for the Southwest waterfront project, said that once the project is completed, both Gangplank and the Capital Yacht Club will have the same number of slips and that the "bulkhead, promenade and marina slips will be reconstructed and improved as part of the project."

The first phase of development is supposed to take place from 7th Street to 9th Street, where the Gangplank Marina is located. Find out what other plans the developers have for the waterfront at Wednesday's Community Forum. Check the Upcoming Events page for details.
Posted by SWill at 11:11 PM