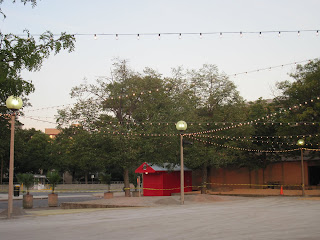 In The Washington Post over the weekend, there was an article describing some of the programming that will take place in Southwest’s newest park, 7th Street Landing, a temporary park at the intersection of 7th Street and Water Street on the Southwest Waterfront that opens on Thursday. The park will have events on Thursdays through Sundays, at least for a month while the weather is still pleasant. From the article:

The nearby Westminster Presbyterian Church will provide live music on Thursday evenings. Every Friday night, the park will host a "food-truck roundup" featuring cupcakes, tacos, salads and Indian food. On Saturdays, yoga classes will be presented by Lululemon Athletica, a Vancouver, B.C.-based apparel firm. Each day will bring lawn games, including pétanque (a French version of bocce) and Ping-Pong, as well as food from District Doghouse, a food cart by the owners of the Cantina Marina restaurant, which is experimenting with wild boar, venison and duck meat in search of a new sausage offering.

There will be an opening ceremony on Thursday from 5:30pm–8pm, as a part of the Anacostia Waterfront Initiative’s 10-year anniversary celebration. I drove by the site on Sunday evening and saw some palm trees in planters, but the park is still largely under construction.

Once Hogate’s is demolished by next spring, the Hoffman/Marquette team will have an additional four-acre site to use for programming, including festivities for the National Cherry Blossom Festival.

Update: I went by the park this evening and more work has been done (see photo above). The photo at the top of this post shows a view of the park looking toward the southeast. The red building will most likely be where District Doghouse will be located. Palm trees are visible along the park's edge and lights have been strung. Compacted soil that has the appearance of sand has replaced the concrete surface of the park. 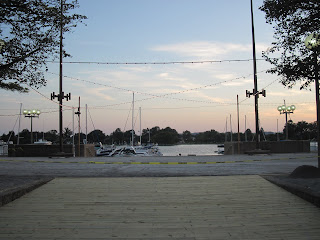 Above is another photo with a view west towards the Washington Channel at dusk. A boardwalk ramp has been installed at the entrance to the park from Water Street.

Update #2: Below is a flyer with additional details on all the programming planned at 7th Street Landing. 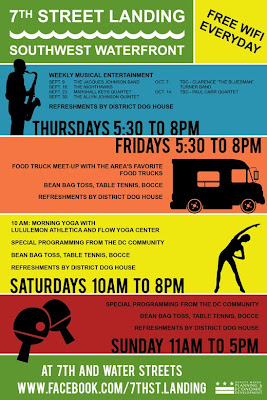 Had a great time tonight. Chesapeake dog, music, sunset, and great company made for a fantastic evening.