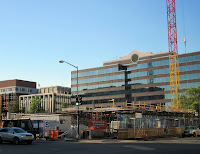 The new Consolidated Forensic Laboratory (CFL), under construction at the corner of 4th & E Street, has reached ground level. Construction began on the project earlier this year, after a five-month delay caused by alleged irregularities with the awarding of the construction contract. A covered walkway was constructed over the past couple of months that allows pedestrians to walk along the west side of 4th Street as construction continues. The walkway has lighting to illuminate the area at night, which can be a desolate stretch since there is not much foot traffic after work hours. The CFL is scheduled to deliver in 2012. Progress photos to come! Update: Photos have been added. 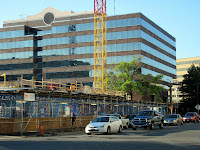 Here is a close-up view of the covered walkway.
Posted by SWill at 8:34 AM