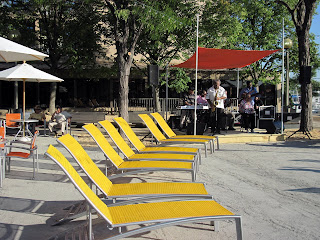 This evening was the grand opening of 7th Street Landing, a new park along the Southwest Waterfront. For the next six weeks, the park will play host to several planned activities four days a week from Thursday to Sunday. Jazz bands will perform on Thursdays; food cart corrals on Fridays; yoga on Saturday mornings; and community events on Saturday afternoons and Sundays. For a full list of programming, take a look at this flier. Elinor Bacon from E.R. Bacon Development, one of the partners in the redevelopment of the Southwest Waterfront, gave a speech before the Jacques Johnson Band started playing their second set, and offered the use of the park for community organizations on the weekends. For instance, Arena Stage will do some performances at 7th Street Landing. If you would like more information on how to reserve the park, contact Elinor Bacon at ebacon@erbacondevelopment.com. 7th Street Landing was built in just three weeks and paid for by the District government. Programming at the park will restart next spring, with the hopes that the soon-to-be demolished Hogate's will offer more space for larger events. Below are some photos from the grand opening. 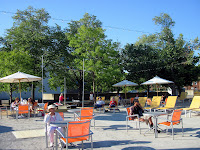 (Left) Here is a view of the northwest part of 7th Street Landing. About 25 tables and 100 chairs have been placed in the park and will be stored away at the end of each evening. 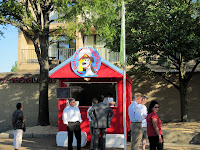 (Right) District Doghouse, a food cart concept from the owners of Cantina Marina, will have a kiosk open on the southeast corner of the park from Thursday to Sunday. A diverse offering of hot dogs are available, from the traditional to lamb and wild boar. 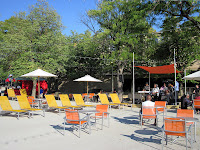 (Left) This is the southeast section of the park. A stage was set up for the Jacques Johnson Band, who played jazz music to entertain the crowd as they made their way to the park. 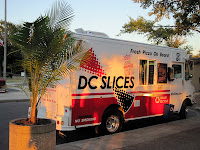 (Right) Several food carts parked along the edge of 7th Street Landing including DC Slices. No alcoholic beverages are currently offered at the park, though.

(Left) District Taco was also in attendance. In addition, Sidewalk Sweets pulled up to serve hungry park goers. The Vanilla Gold Rush and Red Velvet cupcakes were delicious...so were the tacos. Food options along the Southwest Waterfront have now been doubled! 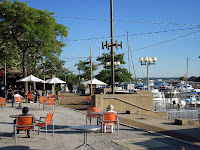 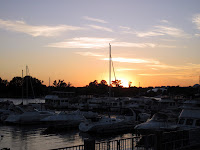 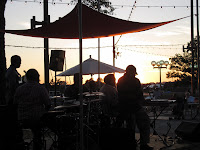 (Right) The Jacques Johnson Band plays their second set as the sun sets on the park on opening night.
Posted by SWill at 10:05 PM

Was there this afternoon. From a rundown park to a charming little spot what a transformation. Had a hotdog and soda and watched the boats in the channel. This is the kind of thing that I think makes Southwest the best place to live in the city.

We went last night (Friday the 17th) and not a single food truck was there for the supposed food truck meet up. A dozen kids, agressive dogs and not a chance of a sandwich, pizza or cupcake made for a pretty disappointing night. No one seems to know about it and no food trucks bother showing up, why bother? I know we weren't the only people there looking for food trucks. Disappointment.