Demonstration Park Under Construction on the Southwest Waterfront 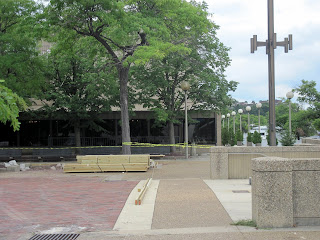 I'm back in DC and settled in, so now I can start blogging about all the stuff I missed for most of August. I tweeted about most of the big news while on vacation and will do blog posts about them over the next few days, but one of the stories I missed was the demonstration park the Hoffman-Marquette development team is building on the Southwest Waterfront, as reported in this month's Southwester. Construction began last week on the park, located at 7th and Water Street, which will replace the park currently on site, which consisted of a plaza, trees, and benches. Elements of the demonstration park, designed by Matthews Nielson, will include a grove, a "beach" area with compacted soil that looks and feels like sand, landscaping, attractive lighting, chaise lounges, tables, and a kiosk serving food and non-alcoholic drinks. Back in November, the idea about a temporary "beach" along the Southwest Waterfront first surfaced and now it's coming to fruition. It will only take three weeks to build the demonstration park, and should be open by September 10th, right around the same time another new park on the other side of South Capitol Street will have its grand opening. While the park is not permanent, it will give a taste of what's to come along the new Southwest Waterfront. (Above is a photo of the park taken on Wednesday.)
Posted by SWill at 10:48 PM

Why is it called a "Demonstration Park?" That sounds like something for protest movements.

Welcome back! Missed your blog posts.

sounds cool! I'll be out of the country for three months :( I better see pictures :)

Anonymous @ 8:49 AM - I made up the name "demonstration park". It's not the official name of the park.

Caity Rose - Of course there will be pictures!