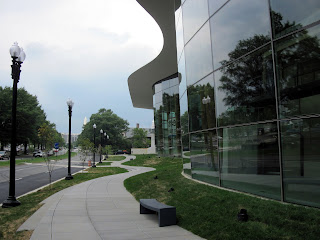 Over the past couple of months, excitement has been building over the reopening of Arena Stage, now known as Arena Stage at the Mead Center for American Theater. Milestones have included the hiring of five playwrights; the announcement of José Andrés Catering with Ridgewells as the operators of the café; a new website; Arena staff moving to their new home; President Obama and First Lady Michelle Obama named honorary chairs of the inaugural season and Opening Gala; Phylicia Rashad, Anna Deavere Smith and E. Faye Butler headlining productions this season; and the 30th Anniversary celebration two weeks ago. Now, individual tickets will go on sale tomorrow. Shows in the inaugural season include:
The first performance of Oklahoma! will take place on October 20th, three days before the official Ribbon-Cutting Ceremony and Community Day Celebration on Saturday, October 23rd. The Community Day will last from 11:30am to 6pm and will involve the closing of 6th Street to vehicles. Activities include roving street performers, music and dance entertainment, and timed-ticketing to tour the facility and performance venues. Indoor activities will include theater workshops, craft activities for children, and Community Engagement program demonstrations. Food will be provided by the four official caterers of the facility and the event will be open to the general public.
On October 25th, a Grand Re-Opening Black-Tie Gala will feature cocktails, dinner and an exclusive one-night-only performance by Tony Award-winner Brian Stokes Mitchell and emceed by ABC7/WJLA-TV lead anchor Leon Harris. Honorary Chairs President Obama and First Lady Michelle Obama, as well as honorary co-chairs Mayor Fenty & Michelle Fenty will be in attendance. For any of you interested in getting information on tickets and table sponsorships for the Gala, contact April Irwin at 202-600-4022.
Posted by SWill at 10:47 PM

Do you know which performance dates will have special pricing for SW residents? The performance calendar was supposed to show that info today, but it doesn't, and Arena Stage phone line has been busy all morning.

Anonymous 10:41am - I'm still waiting to hear back from Arena Stage about special pricing for SW Nights.