- Greater Greater Washington has a post on the Best Streets in DC, which follows up on their thoughts on the worst streets in DC a couple weeks ago. This time, the following SW streets are ranked: M Street (#18), 7th Street (#15), and 14th Street (#5). All of these streets run in other quadrants of the city, so the author's critique took into account the entire length of the street. 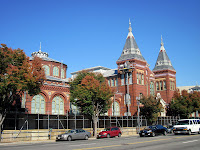 - DCMud has a post about the effort to build a Latino Museum near or on the National Mall. Three out of the four proposed locations are located in Southwest. These locations include the Yates Building at 1400 Independence Avenue, the Whitten Building at 14th & Independence Avenue, and the Arts & Industries Building (pictured).
- UrbanTurf features a listing of a studio at Tiber Island Cooperative Homes for $129,000.
Posted by SWill at 8:05 AM

I am wondering if anyone here knows of a listserv for the SW community?

SWer Naomi Monk has an email distribution list, which is sort of like a listserv, but she has control over what is sent out to the list. Her email address is NMonk10501@aol.com