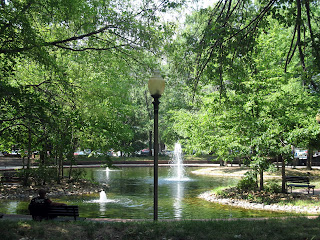 More than a year after the duck pond fountains at Town Center West Park first stopped working, the District Department of Parks and Recreation (DPR) has finally replaced the pumps and the fountains are functioning once again. When the pumps broke in the spring of 2009, the lack of circulation in the pond caused a potential risk for mosquitoes to breed in the area and spread disease. Last summer, a resident who lives in the vicinity of the park contracted West Nile Virus, likely caused by the stagnant water at Town Center West Park. 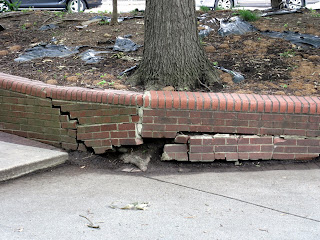 Part of the problem with the maintenance of the park, located at 6th and I Street, SW, is when the park was transferred from the National Park Service to DPR, there were issues with the drainage system and water lines that were not brought to the attention of DPR. As a result, the deferred maintenance caused the pumps in the duck pond to malfunction. Another concern was the condition of the park, which was strewn with trash and leaves, missing streetlights, uncut grass, and crumbling brick retaining walls. These problems had nothing to do with the property transfer, but were due to negligence. Eventually, the park was cleaned and the duck pond drained by DPR until new pumps could be installed.

In the meantime, some local residents recently formed an organization called Neighbors of Town Center West Park to care for the park and serve as an advocacy group. Every second Saturday of the month, this group of volunteers picks up trash and does other maintenance at the park. The next clean-up day will be this Saturday from 10am-12pm. At the June ANC 6D meeting, the commissioners voted unanimously to designate Neighbors of Town Center West Park the official community representative for the park. With this designation, the group can participate in DPR's Park Partners program. 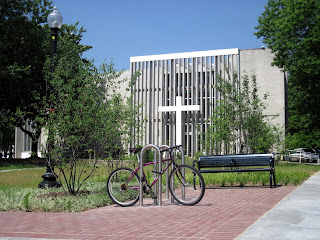 If you want to get involved with the Neighbors of Town Center West Park, contact Bob Craycraft at swdctowncenterwestpark@gmail.com. They also have a Facebook page:
“Town Center Park West, SW Washington DC.”
(This post also appears in this month's Hill Rag)
Posted by SWill at 11:39 PM

Thanks for highlighting this. THe greenspace really is what makes our neighborhood feel so distinctive.

Speaking of which, how much better is the Arena renovation project looking now that they're laying turf? It gives a good sense of what teh feel of that corner will be like once the project's done and fences gone.

Thank you for posting such a useful, impressive and a wicked article./Wow.. looking good!
Retaining Walls

Park restoration is indeed very important for it to retains its natural beauty, and for it to be more attractive to guests as well. I'm a regular visitor at a park in my hometown of Glendale and here in Glendale, fitness centers are where I often go to because I'm obese. And for me to lose more weight, sometimes I also jog at Glendale parks and recreation centers because the area is just wide enough perfect for those health conscious people like me.

Anyone know where I can find the history of this park? Who designed it? When it was built?

I believe the park was designed by Lawrence Halprin of San Francisco, the pre-eminent landscape architect of the period. He also designed the FDR Memorial.

Thank you Phil! A friend found the below for me, which seems to indicate it was designed by William Roberts, and provides further information for anyone interested.


Town Center West Park
Washington, DC (map)
Located at the corner of Sixth and Eye Streets SW, the park is one of three Town Center Parks designed by William Roberts of Wallace McHarg Roberts & Todd (now known as WRT) for the National Park Service, in the Southwest Washington Redevelopment Area along Eye Street. Completed in 1972, the park was conceived as an urban retreat for local residents, office workers, and students of an adjacent school for exceptional children, and was part of a larger effort to enhance and increase recreational space in the neighborhood.

The park, westernmost and largest of the three related parks, was inspired by the regional landscapes of the Chesapeake Bay and Potomac River. The park’s main feature is a large pond with four fountains, its naturalistic shoreline broken by three promontories edged with river rocks and planted with native riparian plants. Additional spaces contained nautically-themed play structures, now moved to Waterside Park. The interior of the park is planted with large shade trees and lined by low brick retaining walls, which give it a sense of enclosure. A circulating walkway connects each of these areas. Managed by the National Park Service until 2007, the park is now maintained by the D.C. Department of Parks and Recreation.