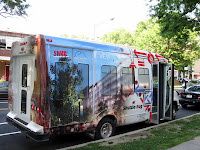 HT to reader Dave: In today's issue of The Washington Post, there's an article about the Shuttle-Bug, which ceased operations at the end of June. Back in December of 2008, the Shuttle-Bug bus was conceived by the Southwest Action Team (SWAT) as a temporary service that allowed residents to safely get around the reconstruction of 4th Street at Waterfront Station, since access to the Metro and Safeway was blocked for residents north of I Street in November 2007. Now that 4th Street has reopened, the service is no longer needed. However, the Shuttle-Bug has become popular with seniors and low-income residents who want the Shuttle-Bug to be reinstated. From the article:

Beth Paulson, founder of the Southwest Action Team, a community organization that helped initiate the shuttle service, said her group has collected about 500 letters in support of resuming the Shuttle-Bug, including one from an assistant D.C. police chief.

The article states that city leaders doubt the service will resume, since there is no funding for the bus and the original intent of the Shuttle-Bug has been met. SWAT is now in the process of raising funds to resume service for a year until more funding can be obtained.
Posted by SWill at 9:28 AM

This happens all the time re government; a service is offered for a temporary purpose but will never die because too many individuals have becomed spoiled. We can't afford it...let it die with dignity.

Completely agree with Anonymous (10:10). I'm an unabashed liberal, but the service was only intended to correct for a temporary hardship - not to be a new convenience.

If people want to band together and support this with their own monies - fine. Or let the local building managers pay for the service (it can be a point in favor of living there). But I agree: government is not there to cater to a spoiled attitude. The DC government has fulfilled its original Shuttle Bug promise and has totally delivered in the new Waterfront Station construction.

Southwest is also just not that big and nothing's *that* far from metro. If I were looking for neighborhoods where it'd be an important community service to help connect people to metro and shopping and such, there are many that would seem to have to take priority over this area. The comparison one of the people quoted in the article draws to H street fails for that reason - it's ten blocks down H street before you really get to the restaurants and such that the shuttle is trying to promote. Start walking that far from the waterfront and you're all the way past the 14th street bridge to the Mall.

"... but the service was only intended to correct for a temporary hardship - not to be a new convenience."

What an effed up, selfish attitude coming from all of you. What about the elderly? What about women? They need a safe way to get home from the grocery store, AT NIGHT. Shuttle Bug should be permanent.