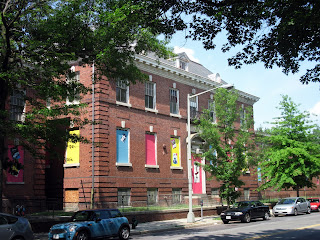 At tonight's ANC 6D meeting, Marilyn Melkonian from Telesis Corporation spoke about the mixed use project planned for the former Randall School building on I Street. The new plans for Randall School are more ambitious than the former one, when the Corcoran was planning on moving its College of Art + Design to Randall and Monument Realty was adding a multifamily building behind the historic school. While the size of the development will remain the same under the Telesis/Rubell team, the components are more varied. As reported previously, the Telesis/Rubell team plans to have a 25,000 SF contemporary art museum, boutique hotel, and residential units. In addition, there will be retail (a classy restaurant is planned in the former auditorium space in the Randall School). Melkonian described some components of the design, including an elevated public plaza facing the Capitol building. The museum will be in the core of the development. Three historic buildings will be saved, while the newer wings will be demolished and replaced with new construction. Half Street will be partially reopened through the project and traffic will be directed towards the center of the development.
The community benefits package worked out between the development team and the ANC is robust, including the following components:
Bing Thom Architects will design the project (the same architect as Arena Stage), along with landscape architects Oehme van Sweden and DC-based architectural history and historic preservation firm EHT Traceries, Inc. Melkonian shared some preliminary renderings of the massing of the project with the ANC commissioners, but said that there will be a formal presentation in the fall by Bing Thom, herself, and Mera Rubell of the preliminary designs for the development.
The ANC unanimously approved a resolution supporting the development team's desire to change the covenants placed on the property by the DC Government, since the intended use of Randall School will no longer be a college campus. A bill has been introduced in the DC Council to change the covenant in place so the purchase and sale agreement between the Corcoran and the Telesis/Rubell team can move forward.
Posted by SWill at 11:27 PM

Wow, sounds interesting. Do you know if any maps or images of the plan are available yet?

I'm trying to get my hands on the preliminary massing images that Ms. Melkonian showed the ANC commissioners at the meeting.

This all looks extremely cool! I find myself more excited about this than whatever waterfront renovation project finally takes off. I suppose some of it is that the Rubel's already have a track record of identifying what is neat about urban neighborhoods and enhancing it, rather than just bulldozing and building a new shopping mall or whatever.

What kind of time line would all of this unfold over? It sounds like there's a long road to go before any activity actually occurs.

It will be 2015 at the earliest that it could open, since the development team still needs to get control of the property, go through approvals, and get financing squared away. 2018 is the latest it can open, or else the land reverts back to the District.